Baby Boomers and Delayed Retirement: Time for a Reality Check

The Baby Boomer generation is facing a harsh reality of delayed retirement. Here’s how to get your retirement back on track.

But is retirement at 65 still a reasonable goal for the vast majority of baby boomers, let alone early retirement?

A combination of weak market returns, struggling government benefits and retirement savings that haven’t met goals could bring a harsh reality for many boomers.

In the 2013 Retirement Confidence Survey conducted by the Employee Benefit Research Institute (EBRI), workers aged 55 and older said the following about their retirement savings:

There’s a troubling disconnect between perception and reality when it comes to how much we will need to spend in retirement and how best to fund that spending.

Delayed Retirement May Be an Unexpected Reality

Not so long ago, retirement planners talked about the three-legged stool of retirement income: Social Security, traditional company pensions and personal savings.

But that three-legged stool seems more like a pogo stick these days. Traditional pensions are on the wane—replaced by contributory plans such as 401(k)s and 403(b)s—and there's widespread skepticism regarding the long-term viability of Social Security.

The parents of boomers could rely on pensions and Social Security for the bulk of their retirement income. The shifting realities of retirement seem to have caught the bulk of baby boomers by surprise.

The Social Security Administration has started to address its shortfall by moving the goal posts. While you can still retire at 62 and receive some benefits, full retirement benefits from SSI aren’t available unless you delay.

The table below shows just how much you can expect from social security depending on the year you were born and the age you start taking benefits. 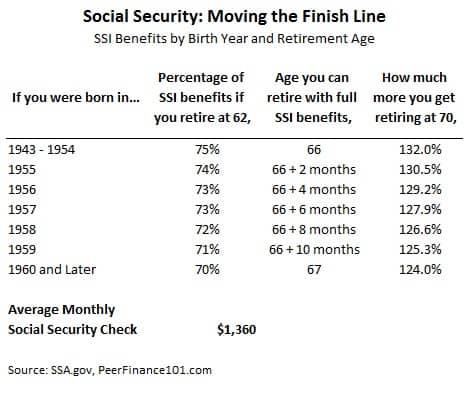 For example, if you were born in 1957, you could retire at 62 and collect about 73% of your full benefits each month for the rest of your life. On the average SSI monthly benefit of $1,360 – that means a benefit of about $993 per month. Your specific retirement benefit will vary depending on how long you worked and other factors.

You could collect the full SSI benefit by waiting until you turn 66 and a half. Delaying retirement until you turn 70 would mean an extra 27.9% or a benefit of approximately $1,739 per month.

A lot of baby boomers are slowly coming to the realization that their retirement savings hasn’t kept up with spending. Among those still working, Gallup reports the average age people expect to retire is 66 years old, up from 63 in its 2002 survey.

The problem is that the actual age at which people are retiring is much younger, just 62 years old according to the poll. More than half the population has already retired by the age of 65 and only about one-in-five wait until 70 or older to retire. 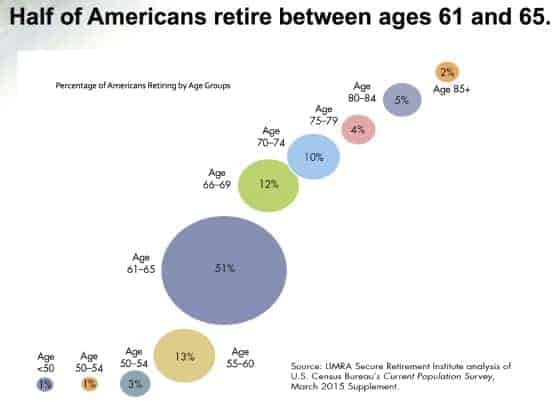 Besides moving the retirement age, other likely scenarios await baby boomers and others in the push to keep Social Security solvent. These include reduced retirement benefits, means testing as has already been done with Medicare, and an even higher eligibility age.

It makes it all the more important to revisit your retirement plan and make sure you are on track to meet your goals.

Getting Your Retirement Back on Track

Maintaining flexibility in your financial life takes a little work, but can pay off down the road. Here are a few financial stretching exercises you can do today to help ensure your financial well-being and independence in retirement:

The ultimate goal is a comfortable retirement—one in which you can maintain your desired lifestyle and “do your own thing” with as much peace of mind as possible. It's still doable, but time is running out.

Whether you’re a Baby Boomer, Gen X or even a Millennial just planning ahead, don’t let the harsh reality of delayed retirement catch you off guard. Make a plan and revisit your retirement savings every few years to make sure you are on track. Be realistic and make the little changes now that will help you avoid the big sacrifices later on.