How to Date When You’re Broke

Being broke doesn’t have to mean being single. Check out these broke dating ideas to find love without losing your financial well-being

Reading through some of the scholarship essays we’ve been posting reminds me of what it was like to be young and broke. Ah, all those ramen noodles.

I’ve always been kind of thrifty (is that the nice word for cheap?) so being broke didn’t bother me too much but it made dating tough. I wasn’t looking for a high-maintenance Barbie but most girls don’t want flowers you pulled from their own yard.

And it’s not just paying for the date when you’re broke but trying not to look like a scrub when you shop the Wal-Mart clearance rack.

So, with the help of my wife who is just as ‘thrifty’ as I am, we put together this list of how to date when you’re broke.

Dating Cheaply without Being Cheap

The idea of broke dating is to take the focus off of what you are doing and put it on each other.

The all-time worst, and most expensive date, has got to be going to the movies. You’re not talking, it’s all about the movie and it’s not cheap to watch Matt Damon talking to himself on Mars.

I found a great list of 51 cheap date ideas on another website so make sure you throw in a mix of date ideas. Always doing the same thing or type of date isn’t going to show you what kind of person you’re dating.

Even if you’re not a sporty-type person, throw in a few competitive activities like bowling or basketball. Do you really want to find out after you’re married that your partner is a sore loser?

Going to flea markets is a popular cheap date but it also serves as a window into someone’s personality. Do they share your interests? Do they look down their nose at anything used? Better to find out now that they’ve got a weird obsession with Russian nesting dolls.

Go Online to Break the Ice for a Nice Price

Most ideas for broke dating I’ve seen are a little hard to pull off until you have gotten to know someone. It helps to get to know someone even a little bit so you know how they will react to your idea of just a walk in the park as a date. 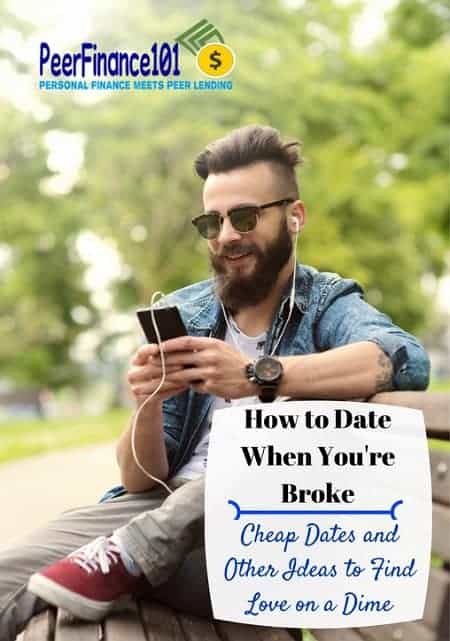 It’s just one of the reasons to try online dating. Not only is meeting someone online fairly cheap but you’ll usually spend two or three emails getting to know each other. That’s at least one $70 dinner you can save and a lot of awkward silences.

Not sure where to start? Check out this online dating chart to compare some of the most popular websites and special offers on each. There are dating sites for just about every group including those for the religiously faithful, driven professionals and older daters.

Broke Dating Fashion: Looking the Part without Spending a Fortune

Shopping is fun…but expensive. You may not need to wear a new shirt every time you take someone out but it better not have holes in it.

It took me a long time to get comfortable buying online but I’m definitely a converted Amazon-aholic. Since there are so many sellers competing in the same product or category, prices get pushed down much further than at traditional retail store.

Beyond just searching for clothes on the site, check out the Amazon Sales & Deals page. It’s like going to an outlet store without leaving your apartment. You’ll find everything from out-of-season to companies trying to launch new products and get reviews.

It takes a little time surfing but I always make it a point to check out the Today’s Deals page as well. Most of the best deals only last for a day or two so you have to be on the ball before they’re sold out. I got a natural bamboo wooden watch for 35% off the other day just three hours before the sale ended.

Being broke doesn’t also mean you have to be single. Break the ice with a little online dating and then save on some great broke dating ideas. If you’re a ‘thrifty’ person like I am, it’s best to see your date’s reaction to some of these ideas anyway before the relationship goes any further.

Teaching Kids How to Manage a Paycheck