This Dumb Financial Decision is the Right One to Make

Is there any personal finance topic more controversial than buying a home versus renting?

Public opinion seems to go in waves. During good times when the economy is growing and home prices are rising, buying a home seems to be the American dream. When the housing market crumbles…not so much.

Financial experts are equally split. Some look at the numbers and come to the conclusion you’re better off renting and investing the extra money. Others look at intangible factors in home ownership and recommend buying.

I would argue that the real value in owning your home isn’t in the numbers or those intangibles. In fact, buying a home may actually be a dumb financial decision.

But you should do it anyway.

What’s the Financial Math for Buying versus Renting?

Ask most financial experts about the buy vs rent decision and they’ll go straight to the numbers.

The return on home ownership is local but on a nationwide-level, it comes to about 5% a year. 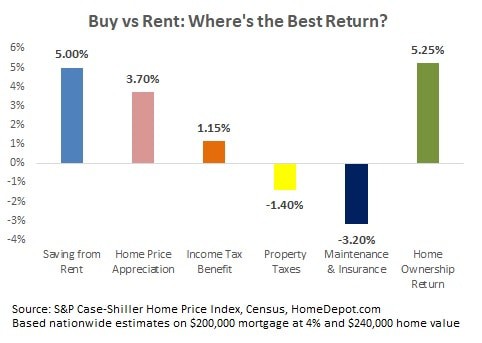 That return of just over 5% is well below the annualized 9.9% return on stocks in the S&P 500 over the last 30 years. It’s even below the 6.3% annualized return on the U.S. Aggregate Bond Index over the period.

There are other reasons in the buy vs rent debate, intangible reasons that can’t be added up. On the pro-side, owning a home gives a family some stability and consistency. On the down-side, being tied down to a mortgage means less ability to move around to where the jobs are. Eric at IdealREI points out job flexibility and local home prices as major factors in renting versus buying.

I think a lot of younger families think buying a home will tie them down and prevent them from doing what they want. It's not the case and there are some very good reasons to buy even if you're not home 365 days every year.

There are other reasons, but I want to focus on one. One reason, that makes absolutely no financial sense, that may change your mind in buy vs rent.

Why Buying a Home is the Better Decision

If you just look at the numbers, owning a home doesn’t make sense. If you can invest your down-payment and the extra money each month for 10% in stocks, then there’s no reason on earth you would take the lower return of home ownership. 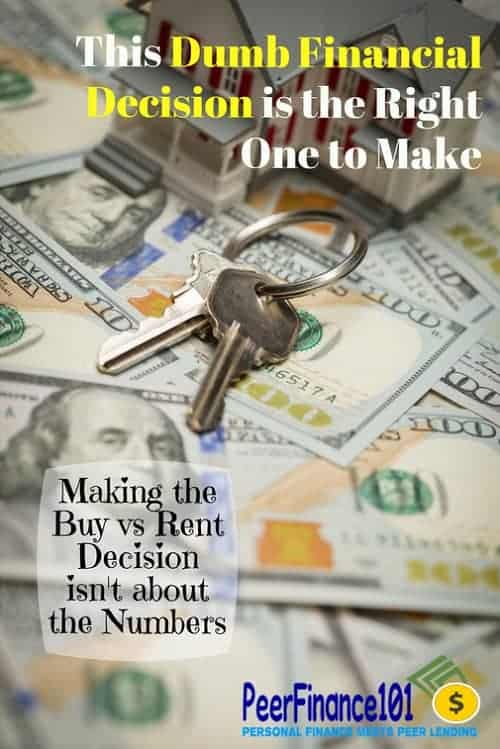 The reality is that most investors don’t see that 10% market return. Market researcher DALBAR publishes a return survey each year. The result, the average investor earned just 4.7% annually over the 20 years through 2015.

It turns out that investors are horrible at…investing!

Panic selling, over-trading and a number of other bad investor behaviors lead to returns that generally underperform those market returns you hear so often.

Another reality confronts the buy versus rent decision, the argument that a renter should be able to take the money they save each month by paying rent rather than making a higher mortgage payment and invest it.

I used to know a Master Sergeant in the Marine Corps that was fond of saying, “Show me an income and I’ll show you how to live above it.” That’s true whether you’re making $1,750 a month as a Lance Corporal or making $650 million over years as a famous Hollywood actor…just ask Johnny Depp.

People just have a tough time saving money when it’s not committed to bills.

A survey by Bankrate shows that 57% of Americans don’t have enough saved up to cover a $500 unexpected expense.

So what we find when we look at real life instead of just the numbers is that many renters are going to spend that extra $150 a month on lattes and avocado toast instead of investing it for the mythical 10% market return.

Let’s be brutally honest here. Buying a home is a forced savings account and a consistent return, two financial benefits that most people sorely need.

That’s $160,000 you have in financial equity. Considering the average American household has just 8,944 saved for retirement, I’d say buying a home is a pretty good financial decision.

The decision to buy a home vs renting is a personal one and you’ll have to weigh your own pros and cons. Go beyond just looking at the numbers though and think about the intangible benefits and how home ownership fits with your financial style. Something that just doesn’t make financial sense may end up being one of the best financial decisions you make.

9 Tips Anyone Can Use to Write a Book