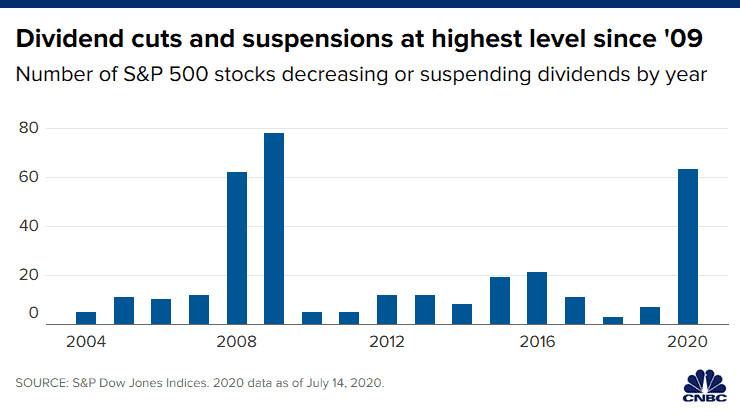 Hey Bow Tie Nation, Joseph Hogue here with the Let's Talk Money channel and a little bit of positivity for you in today's video.

Nation, 2020 has been a dividend investor's nightmare! The economic fallout has meant 773 dividend stocks have cut or suspended their payout, with 63 in the S&P 500 index of large cap companies. It's the most since 2009 and more dividend cuts are expected through the rest of the year.

Now if that doesn't sound very positive, today I'm highlighting five stocks that could be about to reverse those dividend cuts, increase their dividends and put more money in your pocket!

And I was actually planning on including those dividend stocks already increasing their payments, the ones with that consistent history of higher yields, but I'm going to save that one for a later video and instead focus here on the best opportunities in these turnaround dividend-paying companies.

Because that's really what these are all about. Dividend investors love those payments and cutting the dividend has meant that these stocks have been slammed hard on the news. The five I'm highlighting today though have strong financial positions, good business models and that's going to allow them to increase the dividend once again and that could rocket those share prices higher.

Should You Invest in Stocks after the Dividend Cut?

So besides highlighting those five dividend stocks ready to boost their payout, I'll show you what to look for to find that dividend safety. I'll show you exactly what I'm looking for in the financial statements to give me the confidence that these dividend-payers will return.

Nation, this pandemic has hit every sector of the economy. More than 770 dividend cuts means companies in every industry have pulled back, not just energy or tourism-related stocks. If you know what to look for though, you see that a lot of these have just been management being overly cautious. You get a circling of the wagons at these companies to protect cash flow just in case this thing gets any worse but the company isn't in any real danger.

That's where I want to look, at those companies that are just being cautious with the cash flow, with strong financials, and businesses that can support that higher dividend yield.

A great example of this is Capital One Financial, ticker COF, and really a lot of the banks could fall into this category.

Shares of the $32 billion financial powerhouses have slide 32% this year with a big hit in June when the Federal Reserve released results of its most recent stress test on banks. This is where the Fed takes a worst-case look at the banks and then makes regulations on how much can be paid out as dividends and how much cash needs to be held in reserve.

What really hit the banks here was that the Fed changed the rules in this new meeting. It said banks have to increase the amount of capital buffer against the potential for a recession and have to limit the amount of dividends paid out. It was here that you saw a lot of the banks like Wells Fargo and COF cut their dividends.

But this wasn't a financial crisis and these are still strong banks. Capital One operates mainly through its online and mobile accounts which means clients weren't locked out like with traditional banks. The company books 60% of revenue from credit cards and is well capitalized. Capital One signed its Synchrony card program with Walmart last year which should support those transaction volumes.

Analysts have target prices of between $64 per share to as high as $105 each over the next year so potentially a 47% upside on the price alone. I see the dividend back up to at least thirty- or forty-cents a quarter early next year which would be a dividend yield over 2% for investors at this price.

How to Analyze Dividend Stocks

So you'll notice there are a few things I'm looking for in these dividend cut rebound targets. First is I'm going to the Statement of Cash Flows. This is the actual cash in and out of the company and really the most important of the three financial statements to watch.

In the cash flows, I'm looking for positive cash flow from operations – that the company is bringing in cash, even if net income or overall cash flow is negative. This is an easy one, you just look for this line called Total Cash from Operating Activities usually about a third the way down on the statement.

I'm also looking for what's called Free Cash Flow, and this is just that Cash Flow from Operations, the CFO then minus cash spent for capital expenditures or money the company spends to keep things running. That free cash flow is a good measure of the cash available to either invest back into the company or return to shareholders.

Last here and we'll get back to that list of dividend stocks, but I want to look at the operational expenses, that's the cost of running the business each quarter or year. It's on the Income Statement and I'm going to be comparing this with cash reserves to make sure the company has that cash survivability.

So then if I go to the Balance Sheet, that's one of the three financial statements along with the Income Statement and Cash Flow Statement, then one of the first lines is going to show me how much in cash and short-term investments the company has stashed away.

Watching those cash reserves, especially compared to how much it costs a company to operate each quarter, helps me find those dividend-paying companies with enough set aside that I know they're going to survive and be around for that rebound.

And Nation, I know this seems like a lot of work but this is the kind of research you need to be doing to make sure you're making the best investments possible. I know I'm going to get a lot of requests in the comment section below just to list out the five dividend stock picks…that is not how you should be investing.

Nation, you cannot depend entirely on YouTubers to just tell you which stocks to buy…no matter how great they look in a Bow Tie!

I want give you these fundamentals to watch for, this process for picking stocks so YOU become a better investor.

I highlighted Southwest Airlines, ticker LUV, in early June as my favorite of the major carriers. Since then, all the majors have had a tough time but Southwest has held up relatively well.

I still believe, if you want a rebound play in one of the hardest hit industries, this is it!

Southwest cut its dividend completely after the March payment from $0.18 per share. The company has been a great dividend payer since 1980 and produced a 19% annual dividend growth over the last five years.

The company has the lowest break-even capacity of the four major carriers. Southwest needs to fill just 72% of the seats on each plane to break-even, well under the average and more than 6% better profitability than American Airlines.

That lower cost structure means the shares have held up better this year, down about 33% from the peak, and will move to profitability before the other airlines.

Southwest actually managed to eke out positive cash flow from operations last quarter and booked $2.4 billion in CFO over the last year. The company reported $1.5 billion in free cash flow and lowered it's quarterly operating expenses to just $220 million from $770 million in the first quarter.

What really gives me the confidence in Southwest though is the $14.5 billion the company has in cash reserves. That represents years of financial flexibility for the company and in our June analysis, we saw that Southwest also has the highest interest coverage by far among the majors.

Analysts have price targets from $36 per share to as high as $54 each over the next year. When that dividend is reinstated, and I think it happens sooner than the other airlines, it's a 1.8% dividend yield and higher share price waiting for investors.

I'm buying all five of these dividend stocks today in my Webull account. I use Webull for all my trading because I get all the charts and research I need. I can see analyst price targets and use the stock simulator to test strategies before I commit any money. Use the link to Webull here and get a free share of stock worth up to $1,600 when you open an account and make your first deposit.

Bud is actually also one of the world's five largest consumer product companies and while beer consumption is still chugging along, its bar and restaurant business has taken a hit.

Still though, Anheuser Busch owns five of the top 10 beer brands and 18 brands with retail sales of $1 billion each. This is a company that just pours cash flow and is always going to be around.

The June dividend was cut to $0.55 from the $0.89 per share paid in November and down from a high of $2.39 paid in 2018. All the alcoholic beverage-makers have been hit over the last few years and I'm not saying you get back to that $4-plus annual dividend anytime soon but even a bounce back to $0.80 per share gives you a 3% dividend yield.

The company is producing $10 billion in operational cash flow and free cash flow of $5 billion a year, so generating plenty of cash. It has over $25 billion in cash reserves against annual operating expenses of $15 billion.

Analysts have target prices between $59 per share to as high as $89 each so even that low target is above the current price on the stock.

Next on our dividend list, Invesco Limited, ticker IVZ, the seventh-largest asset manager in the United States.

Invesco cut its dividend to $0.15 per share after February from the $0.31 per share previously but even after the cut, it's still paying out a 5.8% dividend yield.

Now active asset managers, so those more focused on beating the market than just passive indexing, have had a tough time competing but Invesco's $1.1 trillion in assets under management gives it the size to survive in a consolidating market.

The company closed its acquisition of Oppenheimer funds last year and the increased scale has added to profitability and cross-selling. It's still booking a solid retention rate of clients above 75% and cash flows should support the higher dividend in a less certain economic environment.

I think the shares can get back to around $13 or $15 a share and investors could collect a 12% dividend yield if the payment gets boosted back to its prior level.

Next is Rollins, ticker ROL, and a dividend stock that has actually gone up after cutting its payment.

Rollins is an $18 billion leader in pest control services to residential and commercial customers. It cut the dividend in February from $0.15 per share to $0.12 and then to $0.08 per share in May but shares have still managed to jump 64% this year.

Cash flow from operations almost doubled in the second quarter and is up 82% from last year. Free cash flow alone is above $300 million a year and it's actually a little odd that the company cut its dividend. This is the perfect example of management just being extremely careful, especially with the hotel and food service business where revenue is less certain.

The company has $130 million in balance sheet cash against just $390 million in long-term debt and $740 million in annual operating expenses. Revenue has continued to grow, up 8.7% a year over the last three and this is one of the few growth stocks on the list.

Analyst targets don't leave much room for prices with the top target at $51 per share but the business is growing so fast that I wouldn't be surprised if those targets are increased soon.

Dividend cuts don't have to mean a worthless investment and some can actually be an opportunity. Invest in these strong companies after their dividend disaster and take advantage of lower stock prices.