What to do when Facing a Personal Finance Do-Over

Jeff Curran shares his PeerStory and how he overcame a personal finance do-over when moving to a new city.

Today’s PeerStory is from a former coworker at the State of Iowa. Jeff and I worked as Labor Market Research Economists helping to get the state’s workforce back on track after the financial meltdown. Jeff left to finish his graduate degree in 2012 and later moved to Boston.

This is his story about getting a financial do-over and getting his finances in order ahead of his new life on the East Coast. 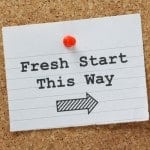 Hitting the Restart on Your Personal Finances

I recently had a near total restart in my personal finances. It’s not that I was necessarily starting from scratch, but rather that I was entering a situation where I had no baseline and no idea where to start. I just got a graduate degree from the University of Iowa in Iowa City and packed up to move to Boston, Massachusetts for a job.

I had been living off of student loans for two years; saving nothing, investing little, and living fugally. As you can imagine, the cost of living in Boston is a bit higher than in Iowa City. All of a sudden I had to address budgeting in a city that I knew very little about and determining savings and investing levels with very little prior knowledge.

I started with the base assumption that the absolute worst thing that I could do was to do nothing. This seems like a little thing, but I’ve been known to avoid situations where I’m uncomfortable or uncertain. It was a necessary realization for me.

Next, I made assumptions and set a basic budget. I kept my categories broad with the idea that I would overestimate some parts of the budget and overestimate others. It didn’t matter too much as long as it averaged out.

This basic budget allowed me to see the tradeoffs that I could make in my budget and the places in the budget that had a little wiggle room. I ended up opting for an apartment that was under my maximum and used that money for investing and savings. Next, I used the first couple of months to adjust my budget and get a better feel for what my life would be like in this new city. I adjusted this discretionary spending and was able to put a little bit more into short-term savings.

In the end, my strategy included making broad assumptions so that I could gain a safe baseline before I got to my new city. After that, I adjusted until I found the balance that was right for me.

We cannot start over but we can BEGIN NOW and make a NEW ENDING.
Zig Ziglar

Jeff’s budget is a great example of the fact that budgeting and setting financial goals doesn’t have to be a complicated and painful process. This is something we talked about in an earlier post, setting financial goals and a budget you can keep. Focus on the important things and work from there. I would say that you should factor in a small amount for savings first, before budgeting for expenses. This helps to make sure you get started saving for your financial goals rather than always waiting for a little money to be left over in your budget.

I love Jeff’s statement about starting from the assumption that the worst thing to do is nothing. It’s not just Jeff but many people procrastinate setting any kind of financial plan well into their later years. It’s a big part of the reason that many are facing a retirement crisis with little to live on beyond social security. Being worried about what your financial plan may look like is one thing, letting that worry paralyze you until the problem gets bigger than you can handle is another.

Having a financial do-over is not the end of the world and can actually be a good thing if it forces you to address your finances and get on the right path.

I want to thank Jeff for sharing his story of personal finance restart and his advice for others in the same situation. If you’ve got a PeerStory about a personal finance challenge or success, share it here on PeerFinance101 where everyone can learn from it.