Shopping is fun! Ok, I said it and we all know how easy it is to get in over your head on credit card debt. I’m not going to sit here and judge or tell you why you shouldn’t have gotten into the situation.

We cover credit repair and budgeting quite a bit on the blog but haven’t hit quite as much on what to do when your options have really run out. I’ll repeat it but debt settlement services should probably be your last route to debt management. It’s better than just walking away from your debt in a bankruptcy but will still be a hit on your credit score and a tough process to complete.

A quick preview of how the debt settlement process works:

We’ll get further into the details later as well as some of the advantages and disadvantages of working with a debt settlement company.

Before you jump into the debt settlement process, because it does have some bad consequences, you might check out some of these alternatives to debt settlement:

Debt settlement services are a tool just like debt and you need to know how to use it to decide if it’s your best option.

What is Debt Settlement Negotiation?

This gives creditors a little more incentive to accept less than the entire amount because they might not get anything otherwise.

The debt settlement provider will also ask you to make monthly payments into an account that will be used to pay off your debts once they’ve been settled. After funding the account for a while, the company will start negotiating with each of your creditors.

They will make an offer to pay a certain percentage of the debt. The creditor may counter with another offer or refuse to negotiate at first but usually comes around to settle the debt.

The creditors that settled will be paid out of the settlement account and you will get a settlement letter on your debt.

Why Should You Consider Debt Settlement Negotiation?

Debt settlement negotiation is a process that is used to settle debts with creditors. It is a viable option for those who are struggling to find a way to repay their debt, or those who can't afford the monthly payments.

Debt settlement negotiation can be preferable as it does not require you to file bankruptcy, which may damage your credit score. It also provides more legal protection than bankruptcy will.

There are many benefits of debt settlement negotiation and there's no reason you shouldn't consider it as an option for managing your debts and repairing your finances.

One of the most common reasons people file for bankruptcy is overloading on debt. This can happen when the interest rates are high or they have unexpected expenses. Debt settlement negotiation can help you get out of debt without having to file for bankruptcy.

Debt settlement negotiations can be a great way to pay off your debts. Debt settlements are an affordable alternative to bankruptcy and eliminate the stigma of filing for bankruptcy.

When you file for bankruptcy, you will still owe your creditors the same amount of money that you owed before you filed. With debt settlement negotiations, you repay a certain amount according to the percentage negotiated with your creditors and put an end to creditor harassment.

Debt settlement negotiation is a process of working with your creditors to reach an agreement on reduced balances, lower monthly payments, and extended terms of repayment.

This is a cost-effective way to manage debt. It can also reduce your debts without going through bankruptcy or foreclosure proceedings. And it's the only way that will allow you to keep your assets and not lose equity in your home, car, or other possessions.

Debt settlement does work but there are some big consequences that might make you think twice. Yes, you might be able to pay half or less of the money you own on credit cards and a few other debts.

Some of the savings though will go to pay the debt settlement company. You will also destroy your credit score worse than it already is from not paying your debts while the company is negotiating with creditors. It can take from five to seven years to build your credit score back from this. Debt settlement is better than bankruptcy, if that’s your only other alternative, but you will still be paying higher interest rates for years because of a bad credit score.

That means taking advantage of alternatives to debt settlement should be your first choice.

At this point, a debt consolidation loan from companies like PersonalLoans.com are a better alternative. You get a lump sum to pay off your debts and potentially a much lower monthly payment on your personal loan. I’ve reviewed all the peer to peer loan sites but like Personal Loans for its lower fees and ability to help bad credit borrowers with lower credit scores.

Don’t wait for debt accounts to go to collection agencies or for creditors to start calling you. If your payments on credit cards and other debt are more than you’re making each month, then you need to find a solution as soon as possible. Debt is normally marked as charged-off and passed to a collections agency after six months of non-payment. While any missed payments look bad on a credit score, having a charge-off will destroy your score.

Contacting creditors quickly might be able to get you on a debt management plan and lower your payments. Creditors get very little when they pass the debt on to a collection agency or if they have to work with a debt settlement provider, they’re much more likely to work with you than to take a big loss. Be a tough negotiator and get any agreement in writing.

If you aren’t able to work it out directly with your creditors and you just are not able to make payments on your debt, then a debt settlement service may be the only option to avoid bankruptcy.

I’ve read a lot of hate articles on the web, usually written by disgruntled employees at settlement companies, about how debt settlement takes advantage of people.

People complain about the first few account deposits going to fees or about the servicer fee of 30% but you’re still saving more than $10,000 from what you owed. Debt settlement isn’t your best option or the cheapest but at this point, it’s still much better than bankruptcy and you are still paying much less than what you owed.

Debt settlement does work. Yes, there are drawbacks but if it is your only option before bankruptcy then it’s the better alternative.

How the Debt Settlement Process Works

I’m going off the debt settlement process from CuraDebt

here but most settlement servicers use the same process. After an interview with the debt settlement provider, you’ll open a savings account that will go to funding your settlement payoff. The debt service will estimate how much you need to put into the account each month, usually well below what you’re currently making in debt payments.

You’ll probably have to put money in this account for several months before the debt service provider will start negotiating with creditors. Creditors will start calling and may even threaten to sue you in court. This is just intimidation on their part because they know what is coming next.

The debt settlement company will start calling creditors to negotiate a payoff amount. The creditors know it will be much, much cheaper just to settle rather than go to court. Yours isn’t the first debt that has been settled, let the debt settlement provider do their job.

Usually in two or three years, your settlement account will be large enough to pay off the settled debt. Make sure you get a settlement letter from each creditor and make sure they report the debt settled on your credit report. They’re required to do this by law but may need reminding to get them off their butts. 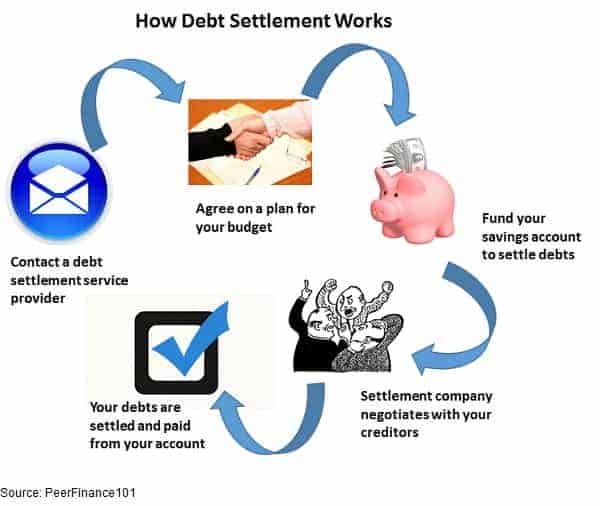 A Few Things to Remember about Debt Settlement Providers

Don’t agree to a debt payoff you can’t handle. You may have to make monthly payments into your settlement account for three years or more depending on how much debt you had to start. Drop out of the program before your debts are settled and you’ll still have to pay many of the fees along with your debts.

Debt settlement providers can’t guarantee to reduce your debt with every creditor. It’s not often but some creditors may hold out and want paid in full. The debt settlement company is only allowed to charge you a fee for the debt that it settles. If you have four creditors and the settlement service successfully negotiates with only three, it can only charge you a fee on those three debts.

If you’re ever in doubt about something the debt service provider says, check with your state Attorney General or the local consumer protection agency. There are some debt settlement scams that come up every once in a while.

Remember that debt forgiveness may be considered taxable income on your federal income taxes for the year. Any settlement of debt more than $600 is taxable so you could be looking at a hefty tax bill if you’re settling a large amount.

has been providing debt settlement services since 2000 along with debt counseling and other services. The company is able to provide debt settlement help in 38 states and can negotiate credit card debt, medical bills, business debt, back taxes and some secured debts. You generally won’t be able to negotiate lawsuit debt, utility bills, student loans or mortgage debt with debt settlement providers.

Understanding how the debt settlement process works is one step closer to getting yourself back on track. Debt negotiation might not be the best choice but you’re better off keeping your options open. Check out some of the alternatives to debt settlement like a consolidation loan before talking with a debt settlement company. If you are still unable to make payments then debt settlement providers can help save you money and avoid bankruptcy.