The government moved closer to creating a mandatory system of retirement saving last week, for better or worse.

President Obama has included a proposal in every annual budget that would create a system of automatic enrollment for employees into state-run retirement plans. Congress has rejected the proposals each time but it seems it won’t be able to do so for long.

Under an executive order, the Department of Labor proposed new regulations last week that would grant safe harbor status for states to automatically enroll workers into state-managed individual retirement accounts (IRAs). This clears the way for states to create their own systems and sidesteps congressional oversight.

While something needs to be done about the looming crisis in retirement savings, is this new regulation the right direction or will the cure be worse than the disease?

Why we need a system of automatic enrollment for retirement savings

With the demise of defined-benefit pension plans in the workplace, the United States could be looking at a retirement crisis in the near future. There are 68 million workers not covered by an employer retirement plan and less than 10% of these have set up an IRA of their own. A new report by asset manager BlackRock finds that the average retirement portfolio of $136,200 would only provide an annual income of $9,129 for retirees.

Four states (Illinois, Oregon, Washington and California) have already passed legislation that creates a state-run retirement savings plan while 19 other states are considering plans. These plans allow for the automatic deduction of an employee’s salary into a state-run IRA if that employee isn’t already covered by an employer plan.

Under a plan being established in New Jersey, workers without an employer-sponsored plan would have 3% of their salary deducted automatically and placed in the state’s plan. An employee required to put $1,500 annually into a retirement account earning 5% would have $181,200 after 40 years. That’s still not much to live on but is better than most people have done on their own.

Problems with a system of automatic enrollment for retirement savings 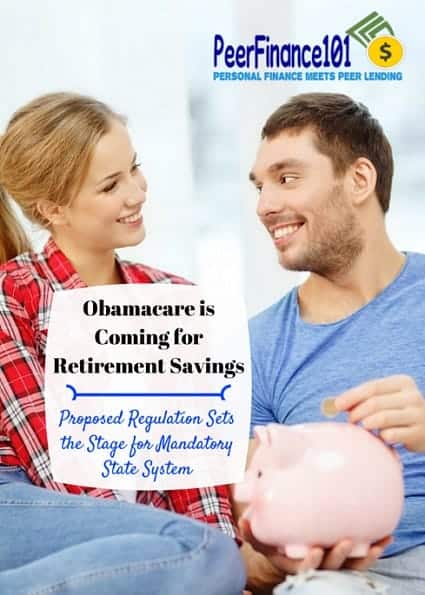 I was agnostic on the creation of the Affordable Care Act (ACA) for universal healthcare coverage. Everyone deserves access to good medical care, I’m just not sure the government is the most capable at managing that system.

I’m even more hesitant of a state-run system for automatic enrollment in retirement plans.

The Employee Retirement Income Security Act of 1974 (ERISA) was established to set standards for company retirement plans and to protect employees from conflicts. Under ERISA, plans must be managed by someone acting solely in the interest of the savers. Those plan managers work with investment companies to offer different funds but can be held liable if fees are found to be excessive.

The safe harbor provision proposed by the Department of Labor would mean state-run retirement plans wouldn’t be subject to the same oversight and protection provided by ERISA. By not requiring states to comply with the same rules as private employer plans, you put workplace plans at a disadvantage and we could see a shift to employers dropping their own plans as we’ve seen in the healthcare insurance analogy.

Besides the conflicts of interests that could develop under state plans, resulting in hidden fees for investors, states haven’t necessarily done a great job of managing their own pension plans. The Pew Charitable Trust reports a funding shortfall of more than $1 trillion in the amount states of benefits promised to state’s workers and the amount in pension funds. Holding too much in stocks ahead of the Great Recession and just not putting away enough into the system have contributed to terrifically-underfunded pension funds.

New Jersey has a $51 billion hole in its state pension fund. What happens to those automatically-enrolled worker funds when the state cannot make its payment to retired public service workers?

The proposed regulation has a 60-day comment period where people can write in by email to [email protected] or by using the Federal eRulemaking portal.