How to Profit from Brexit and Rock-Bottom Rates

So the big story this week is Brexit and how it’s causing stocks around the world to tumble. I provided a detailed explanation of the Brexit in a post on our sister blog, My Stock Market Basics, last week but wanted to post something here as well. A lot of people I’ve talked to are worried that Brexit will cause the economy to collapse and they won’t be able to retire in a few years.

While Brexit has put stocks on shaky ground and could mean a tough summer for the stock market, it isn’t as bad as the media is reporting. Understand a few of the consequences and what they mean for your personal finances.

What Does Brexit Mean to ME?

The Britons voted last week to leave the European Union agreement. Since it is only a monetary union, it’s not like one of the states voting to split from the U.S. but there are some changes that will affect the global economy. The U.K. never adopted the euro so it won’t have to deal with that but it will have to renegotiate trade deals with the E.U. and any of its trade partners, including the United States.

Most economists are predicting a recession in the U.K. this year but few think it will mean much of a change here in the States. Unless you have close economic ties to a U.K. company through your business, you probably won’t notice it.

The economy here in the U.S. has been struggling and never rebounded as quickly after the 2009 crisis as many would have liked but should still do well this year. The stock market fell sharply Friday and Monday but has rebounded. Another article describing why I don’t worry about a stock market crash went viral this week and shares two strategies that will protect your investments from a crash.

The biggest difference we’ll see from Brexit, one that most people don’t realize, is that it means low interest rates are here to stay for a very long time. The interest rate on the 10-year U.S. Treasury fell to near its record low and global interest rates are the lowest they’ve been in more than 500 years.

I’ve never been one to avoid debt, instead using it as a financial tool. With interest rates at record lows, it is even more important that you learn how to use debt. A lot of bloggers like to preach debt payoff and that you avoid all debt like the plague. Why?!

You can get a 15-year mortgage for less than 2.8% and rates are even lower for refinance. That is just 0.6% higher than the rate of inflation over the last year. That means borrowing $200,000 costs you just $100 a month in interest after accounting for inflation.

Check your rate on a 15-year Refinance

Refinancing your home for a $50,000 cash out and investing in a safe portfolio of bonds for 4.5% will mean an extra $70,000 at the end of 20 years. The chart below shows portfolio value after accounting for interest and principal payments. 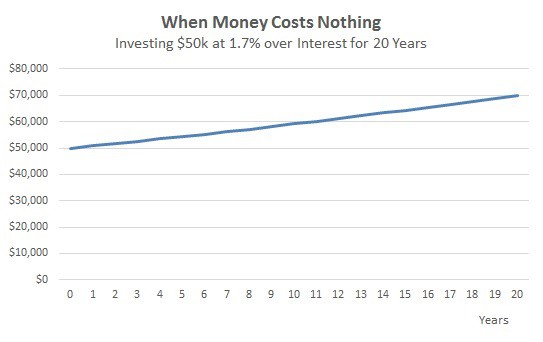 A lot of people will disagree with me, saying people are too irresponsible with debt and you shouldn’t borrow money just because rates are low. I absolutely agree if your intention is only to blow the money on a shopping spree.

But if you invest the money in relatively safe investments earning over the interest on the debt, something that’s getting very easy to do as rates plunge, then it’s about as close to free money as you can get.

Don’t be afraid of debt. Use it as the financial tool it is meant to be. Learn how to use debt to reach your financial goals and find a silver lining in the Brexit aftermath.

What Financial Health Means to Me