How to Make Money

Americans owe more than $1.4 trillion in student loans. That’s T-R-I-L-L-I-O-N and one-in-ten people with student loans are more than 90 days late or defaulting on their loans.

Student loan debt is keeping entire generations from being able to begin their financial lives.

Against this, the need for some kind of post-secondary education is pretty difficult to argue. The employment rate for those 20 to 24 with a high school education is just 69% versus 88% for those with a college degree. Those with a higher degree have more job options and are more likely to report job satisfaction.

But there is a way to get all the benefits of a post-secondary education for about a third the cost and in half the time.

Trade school isn’t just for mechanics and plumbers anymore. You can go to a vocational school for dozens of jobs in fast-growing fields like medical and information technology.

What is Trade School?

Trade school, or vocational training, is a post-secondary institution offering a course of study for a specific job or industry. The school can be part of a community college or can be its own private institution.

Trade school courses are generally more hands-on that traditional college classes. You’re actually learning how to do a job so the focus is on practice just as much as it is on book-work. Class sizes are typically smaller with more teacher-student interaction.

Trade schools often work closely with employers in the area because they are the principal source of workers for the occupation. Employers sit on governing boards to guide coursework and training and are active in recruiting new trade school graduates.

What Jobs are Available with Trade School?

I remember seeing trade school commercials when I was younger. Most were for electrical or industrial jobs. Many of my uncles and cousins are electricians and carpenters so I’ve grown up hearing about these types of jobs. 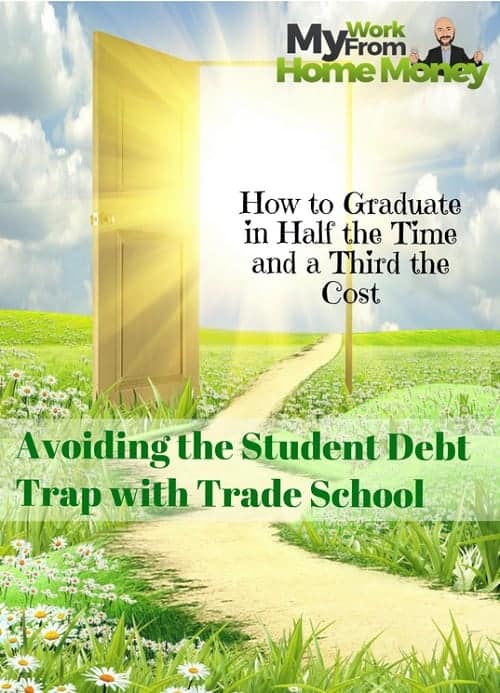 Over the last decade, trade schools have opened up to a lot more occupations. A lot of this is due to the surge in costs at four-year colleges. If families can’t afford college then the supply of new college-educated workers falls off a cliff. The way to fix this has been to create more trade schools for critical jobs that must be filled, especially jobs in the medical field.

So you’ve still got all the trade school jobs in industrial and construction, but you’ve also got trade schools for medical, IT and the arts.

Examples of IT jobs you can get with a trade school education include computer network architect, applications developer, programmer and database administration.

Examples of trade school jobs in the arts include film editor, fashion designer and animator.

All of these jobs pay well over $20 an hour and most pay above $30 an hour on average.

Besides the need for a workforce with specific skills training, trade schools have developed to address a lot of the disadvantages in traditional college education.

A bachelor’s degree is loaded with classes that may be completely irrelevant to your future job plans. Most four-year institutions require new students to take a series of liberal arts courses in composition, religious studies, art and history.

I love reading history but I don’t think people should be forced to take a history course if it’s not going to help in their career.

The result is that trade schools graduate students in two years versus colleges that take four years or longer for a bachelor’s degree.

Colleges have bloated expenses with an army of administrators, counselors and service personnel. Don’t even get me started on the cost of running athletic programs. It all works to jack up the cost for students.

According to the College Board, the average cost to attend a public, 4-year college for out-of-state students was $24,930 during the 2016 school year. That’s more than 50% higher than the $16,600 average annual cost to attend trade school.

Average salary for graduates is about the only place that a traditional college comes out ahead versus trade school. The National Center for Education Statistics (NCES) reports that people 25-34 years of age with a bachelor’s degree earn a median of $50,000 a year versus $30,500 for those with a high school degree. Trade school graduates are estimated to earn $35,720 a year though the number varies more for different jobs.

If you look at total lifetime wages, accounting for the extra two years of costs and lost wages for college students, the total return on trade school versus college comes out to about the same. 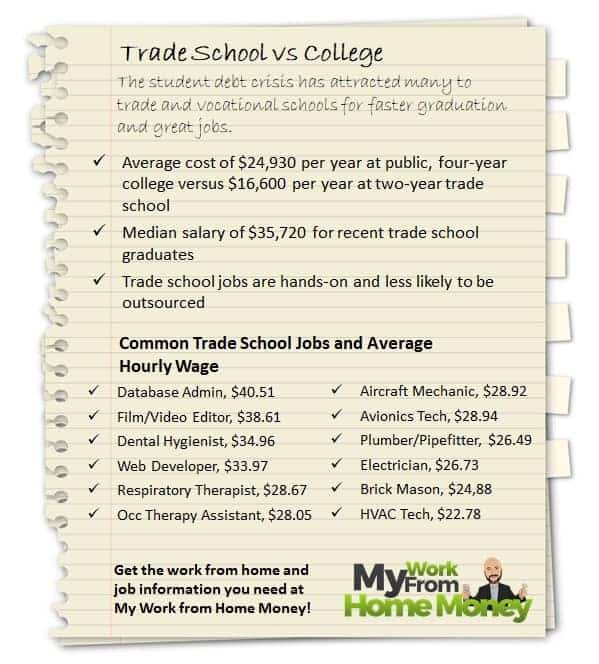 How Much Does Trade School Cost?

Costs for trade schools vary by job and by school but the average is around $16,600 per year for tuition and fees. Trade schools are generally available at community colleges or close to city centers so there is less need for housing compared to college. Most trade school students live with their parents or family rather than a dorm-setting.

The fact that trade schools are so focused on one job helps to keep costs lower. The school doesn’t need a huge staff of administrators to run the program. The program may have a few on staff to coordinate with employers and a small marketing group but instructors make up the majority of staff.

For a total two-year program, trade schools generally cost between $30,000 to $40,000 depending on the vocation. Be wary of for-profit, private trade schools that can charge significantly more.

You’ll still probably need a student loan to pay for trade school but will need to borrow far less than the $99,720 cost of attendance at a four-year college.

How Long Does it Take to Graduate from Trade School?

Trade schools vary by occupation with the shortest around 39 weeks but most curriculum runs two years. Trade schools often offer night programs which may take longer to complete but can be attended by students with day jobs.

Even if it takes you longer to graduate from trade school, you’ll still likely be employed far sooner than if you had gone to college. The median time to graduate with a bachelor’s degree is 52 months with one-in-five students taking up to six years to complete.

How Do I Get into Trade School?

Most community colleges offer trade school curriculum with a department for the specific job training or industry. Admission requirements are not usually too tough. You’ll need your high school diploma or GED and will probably interview with an admissions representative. Most trade schools administer a basic skills test for admission.

Check with employers of the specific job you want to get an idea on where to go to trade school. Employers work very closely to trade schools because it’s their best source for future workers.

There are two downsides to trade schools versus college. The biggest disadvantage is that trade school is hyper-focused on just one job or industry. If you don’t like the job for which you trained, you might be able to find a similar job in the same industry but your options for working in different jobs will be limited.

The range of general and liberal arts courses that college students take gives them a more generalizable skill set. That will come in handy if you don’t know what you want to do or think you might change job types frequently.

The average salary for trade school jobs is lower than that of the average job for traditional college graduates. Just looking at the average is a little misleading though. There are several trade school jobs that pay $40 an hour or more, equivalent to $80,000+ a year. That’s quite a bit more than many jobs requiring a bachelor’s degree so it’s best to look at the kind of jobs you want when looking at potential salary.

Trade schools are an excellent alternative versus attending a four-year college. You get all the benefits of a post-secondary education but in half the time and a third the cost. Trade and vocational school may not be for everyone but it’s definitely an option you should consider when deciding your career path.

The Money Lessons that Made Me Grow Up

5 Money Lessons My Mother Doesn’t Know She Taught Me