Warren Buffett is credited with almost divine powers in picking stocks and his portfolio, holdings of the Berkshire Hathaway company, are followed by investors around the world. The Oracle of Omaha didn’t do so well in 2015 with some big losses and against a basically flat market. Can looking at Warren Buffett’s billion-dollar winners and losers help you invest in 2016? How can you build a Warren Buffett portfolio easily and cheaply through Motif Investing

The Warren Buffett Portfolio of Stocks

Berkshire Hathaway reported 48 positions in stocks as of September 2015, the most recent quarterly report. Large investors and company insiders are required by the Securities & Exchange Commission (SEC) to report their stock holdings every quarter in a 13-F filing to prevent market manipulation and insider trading. As of September, Warren Buffett’s portfolio had amassed a value of over $127.4 billion and Berkshire Hathaway was worth $195,240 per share…an annual gain of 9.9% over the last 20 years.

I decided to look at some of Buffett’s biggest stock holdings, those of a billion dollars or more. If Buffett is ready to put a billion of his shareholders’ money on a single stock, the company might be worth a look. 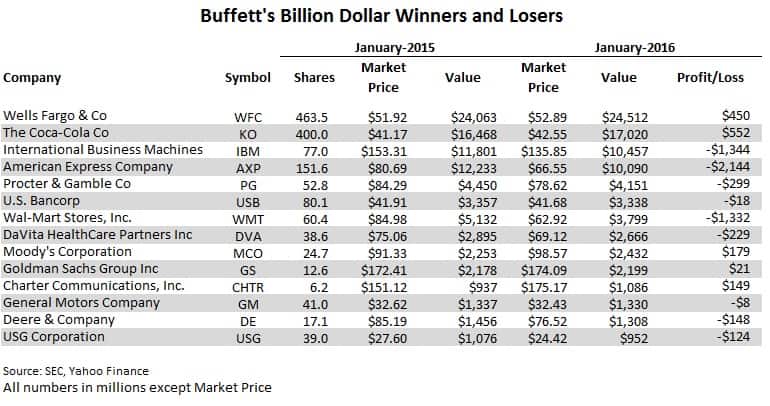 Among the top 14 Warren Buffett stocks, losing positions contributed to a heart-stopping loss of $5.6 billion on the portfolio. Berkshire Hathaway lost more than a billion on three stocks including IBM, American Express and Wal-Mart.

The chart doesn’t include the enormous $7 billion pre-tax gain Buffett made on the merger he helped create between Kraft Foods and the Heinz Company. It chart only includes Buffett stocks and not Berkshire’s insurance companies which generate billions in cash every year.

Of course, Warren Buffett didn’t actually lose this money since it just represents the portfolio value of the stocks. It’s one of the best lessons to be learned from the Buffett portfolio and long-term gains on Berkshire Hathaway. Buffett says his holding period is infinite, he looks for good companies that produce a lot of cash and are good values…and then holds them forever.

Buffett benefits from cash paid out as dividends on his stocks for decades, reinvesting the money into other companies, and can wait for years on a better price if he wants to sell a stock. Warren Buffett may be the smartest professional investor ever but he’s playing the amateur’s game, a strategy highlighted in a previous post and the only way to win the stock market game.

By not trading in and out of his stocks, Buffett has built a passive income source of dividends, one that generates billions a year in cash. He uses this cash to buy new shares at opportunistic times.

What Stocks did Warren Buffett Buy for 2016?

Buffett added more than 10 million shares to his top banking stocks over the first nine months of last year, adding almost 12 million shares to Wells Fargo and U.S. Bancorp while selling 1.6 million shares of Goldman Sachs. Traditional banks should do well as interest rates rise and the difference between the money they pay for deposits and the money loaned out widens. Conversely, Buffett knows that money managers like Goldman Sachs may not do as well as the seven-year bull market in stocks comes to an end.

The Warren Buffett portfolio also added 9.0 million shares of General Motors last year, taking advantage of a falling stock price before the stock rebounded towards the end of the year. Rock-bottom gasoline prices and interest rates around historic lows should mean Americans continue to buy new cars at a record pace in 2016. Auto sales hit a record 17.47 million in 2015, up 5.7% on the year and above the previous record set in 2000.

Warren Buffett has progressively doubled down on his IBM bet, buying $13 billion in shares over nearly five years. As of late last year, the loss on the position was over $2 billion but Buffett has said he stands by the stock and believes it will rebound over the longer-term. IBM has struggled since 2013 on slowing hardware sales but still pays a super-strong 4% dividend. Buffett believes that the company’s size will allow it to shift along with the need for technology hardware and software, while a huge services component will keep cash flowing to return to shareholders.

How to Create your Own Warren Buffett Portfolio

Warren Buffett’s portfolio is pure simplicity and something you can recreate with your own stocks. You don’t have to spend your life analyzing companies or following the stock market. One of Buffett’s most often quoted pieces of advice is to, “buy what you know.”

Buffett claims to drink several cans of Coca-Cola a day and has been an investor in the company since 1986. Most of the stocks in the Buffett portfolio are products from companies that are a basic part of our everyday lives. While I wouldn’t suggest drinking a can of soda every day, invest in the companies whose products you use every day and couldn’t live without.

Investing in companies that make life’s little necessities won’t necessarily make you rich overnight, most of the Warren Buffett stocks are mega-size companies in mature markets, but they offer the safety in their size and huge cash return to shareholders.

I created my own Warren Buffett portfolio through Motif Investing

. Check out the group of 15 stocks and funds by clicking through to Motif and searching for “The Warren Buffett Way.” The fund holds 40% in to exchange traded funds (ETFs); the Vanguard Value ETF and the SPDR S&P Dividend ETF to provide core exposure of dividend and value stocks. The rest of the portfolio is selected from Buffett’s top picks to provide long-term cash and value upside.

Click through to Motif Investing and check out The Warren Buffett Way fund.

How I Made $836 Last Month Self-Publishing on Amazon