Looking for the Best Stocks in America’s Future

The stock market has fallen nearly 15% since its high last year and investors are wondering if we’ll see a repeat of the 2008 crash. Turns out, it’s a great time to pick up some of the best stocks that will benefit from the biggest trends in America’s future.

This is the second post highlighting four investing funds created on the Motif Investing website. Investing on Motif is a new way to buy stocks, giving you instant diversification and lower fees. See our earlier review of Motif Investing and how it’s changing the way people build their portfolios.

Learn how to invest like Warren Buffett in the first article of the series.

As an economist by education and an investment analyst of nearly a decade, I love looking at long-term trends when I pick the best stocks for my own portfolio and when I make recommendations for clients. You’re never going to be able to tell where the stock market is going from one year to the next, let alone on a daily basis. The only people that make money from the market-timing and stock trading schemes are the brokers collecting commissions.

But looking out further to the generational forces and waiting for an opportunity to buy can be one of the best ways to win the stock market game. Beyond the trends and the roller coaster business cycle, there are three sectors that will determine the future of the American economy.

And new investors are in luck because stock prices for two of these sectors have crumbled along with the stock market. Take a long-term view on these three sectors for strong returns over the next three decades.

Check out the American Future Fund on Motif Investing

to put this idea to work in your portfolio.

The Best Stocks for the Future of the American Economy

Oil and Energy – The price of oil has collapsed more than 75% since mid-2014 and investors have completely abandoned shares of oil companies. Most companies have seen their stock prices melt and a few have been bankrupted. But I want you to take a look at the chart below.

It’s not a picture of the Matterhorn in Switzerland, it’s a graph of the price of West Texas Intermediate (WTI) oil. Guess what, the same factors that pushed prices up past $100 a barrel are still going strong over the long-term. Global economic growth is still demanding more energy and more oil every year.

The current collapse in oil prices is on two factors. Investors are worried that China’s economy is slowing and the country won’t need as much oil in the future. China’s economic growth is slowing but it is still growing at more than 6% a year, adding more than $440 billion to the global economy every year. India is expected to overtake China’s growth this year and the U.S. will be adding its own $450 billion in growth.

Oil drilling in the United States and Canada have boomed over the last decade and we’ve got more oil in storage than nearly any other time in history. The collapse in prices has led to a 60% drop in the number of oil rigs in use over the last year. The industry is manic-depressive about this kind of thing. When times are good, they pump as much oil and as fast as possible. When prices start to come down, they stop pumping altogether even though it means a big deficit in the future.

In fact, we are already starting to a growing deficit that BP predicts could equal 180 million tons a year by 2035. 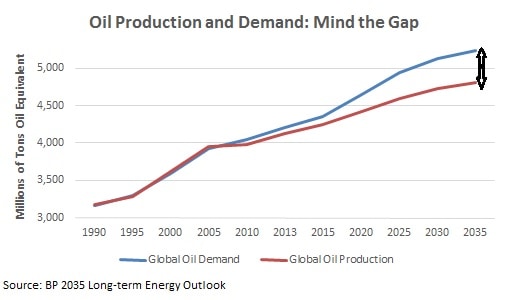 The fact is that oil prices will not be this low for long. With the shale revolution, energy companies will be a big part of the American economy for the next several decades. The U.S. Congress just lifted a 30-year ban on exporting domestic oil. When prices do come back up, U.S. drillers are going to make a lot of money exporting to Asia and Europe.

Agriculture – Farmers in North America have had a few bumper harvests and grain prices have been steadily falling since 2012. The El Nino weather phenomenon brought some really great conditions and crop prices are as low as they’ve been in decades.

Even all that hasn’t been able to change a scary forecast by the World Bank. The agriculture industry needs to increase production of grains by 50% through 2050 or face massive food shortages. Worse still is the fact that climate change could cut crop yields by up to 25% over the period. Even if yields don’t get hit, the annual increase in crop yield is only half of what we need to avoid food shortages.

Like oil and other commodities, grain prices are crazy volatile. The price of corn more than doubled in the two years to 2012 due to a severe drought but has since halved. It’s got short-term traders scared but long-term investors know that agricultural products are going to become very dear over the next couple of decades.

The aging of America is going to mean a dramatic shift in the economy principally around healthcare and senior services. Companies from drug manufacturers to medical insurers and senior-living property owners have all been booking growing sales and will continue to do so for at least another 15 years.

The healthcare theme isn’t quite the bargain opportunity as seen in the other two themes but the force of more than 70 million retiring baby boomers will continue to drive cash flow for stocks in the space.

Stock Market Investing for the Future of America

I created a fund of 15 stocks on Motif Investing called the American Future Fund to invest my own money around the theme. The fund uses the core-satellite approach described in Step-by-Step Investing, putting the majority of the fund in broadly diversified ETFs to provide safety while picking a few individual stocks for upside growth. 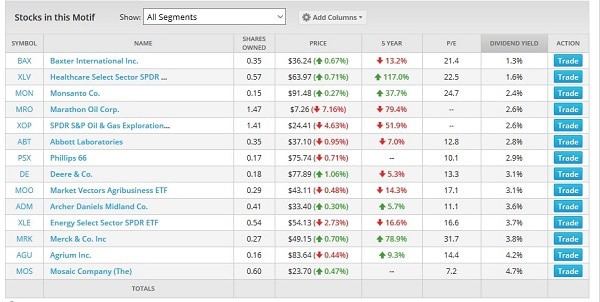 Nearly half of the fund (46%) is held in four exchange traded funds with stocks in agribusiness, healthcare and energy. These four funds give me exposure to hundreds of companies in the three sectors so I don’t have to worry that any one stock will fall on hard times.

Many of the individual agribusiness stocks are fertilizer companies. The only way we are going to increase crop yields high enough to feed the growing global population is by using more fertilizer.

About half of the investment in healthcare stocks is in three drug makers with the other half diversified in the sector ETF. The price of drugs continues to increase at a faster rate than regular inflation and investing in stocks of these companies is a great way to hedge your own cost of healthcare in the future.

Most of the investment in energy stocks is in the two ETFs and diversified across hundreds of oil companies. While the long-term potential for energy prices and stocks is very good, a lot of the individual companies will face a tough road ahead this year and next. I’ve picked a couple of the very best stocks in the energy theme including Phillips 66 which counts Warren Buffett as its largest shareholder.

The rest of the fund is split across 11 individual stocks in the three sectors. Overall, the fund holds 36% of its assets in energy companies, followed by agriculture (32%) and healthcare stocks (31%). The stocks pay an average dividend yield of 2.9% a year which is nearly a percent higher than the yield on stocks in the S&P 500. More than the cash flow I’ll get from dividends, these are the best stocks to follow the future of America and offer a lot of growth potential over the next several decades.

How are you investing over the next 20 or 30 years? What do you think of my American Future Fund? Get up to $150 when you start trading at Motif Investing.