Budgeting is tough for a lot of people. They keep to their budget for all of a month or two and give up before they’ve developed the spending habits that make saving easier. Sometimes budgeting comes out of dire necessity though and can force you to learn smarter spending for life.

Today’s essay is by Mackenzie Raetz, a student at the University of Arizona. She shares how budgeting out of necessity early in life has helped her learn great spending habits that she’s using in college.

Check out Mackenzie’s story and please share on social media. The most-shared essay on how parents can teach their kids about money will win our $500 personal finance scholarship, announced August 31st!

Having trouble getting your budget to work? Check out these 5 budget tricks you won’t believe actually work!

Budgeting for a Better Education

Growing up in a family of five with three kids in private school meant one thing, money was never in abundance. Budgeting was an important part of my family’s life. Rather than spending money on big vacations or even buying a new car, my parents put their hard-earned wages into my sisters’ and my education. They wanted us to have all the tools necessary for success. 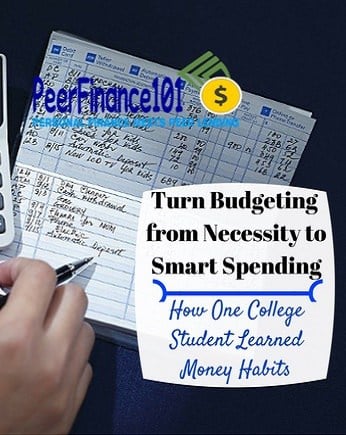 Now that I am going off to college, budgeting has become an important part of my life, too. I’m very careful about spending my money and avoid it whenever possible. I have been saving money my entire life. Since I have never had an allowance or received birthday money, money was in even shorter supply for me than most kids. Most of my money came from change that my parents gave me or doing small jobs for my grandmother. Now that I have graduated, I seem to have more money than ever, but my spending is still in short supply.

But the concept of hard work is not lost on me. I had an internship at the Clark County Coroner’s Office that has taught me to respect paying jobs, and the monetary freedom and responsibility that comes with them. Doing the same hard work for which most are paid has taught me that, once I have an actual job, working hard means more than ever. I do not want to receive anything for which I have not worked. I want the satisfaction of knowing that each paycheck was well earned and well deserved.

Paying the bills can be tough even with a paying gig. Learn how to beat the paycheck to paycheck curse with these money saving tips.

In order to help me gain credit from an early age and teach me about using money wisely, my parents signed me up for a credit card. Though they pay it off for me every month, I still keep careful track of the statements and only use it when absolutely necessary. I also have a checking and savings account, though the money inside has never been touched; I wanted to save as much of it as possible for when I need it most. Being on my own in college will be that moment.

Find the card that’s right for you. Apply for a USAA credit card for cash back and rewards.

Overall, I feel that my parents have prepared me to spend my money wisely in college. Though I am not a big spender, I know that I should still be careful to look around before springing for something, making sure I have the best deal possible on whatever I happen to be buying. I hope to get an on campus job in college to help me pay for my schooling; the less debt my family and I have for my undergraduate degree, the better financial state we will be in moving forward – and the more likely I will be to be able to attend medical school. Spending money wisely is very important; but, then again, so is making sure that you are able to do what you love.

I want to thank Mackenzie for her essay on how early budgeting lessons led to smart spending habits later in life. Be sure to support Mackenzie by sharing the article through social media and check in August for the winner of the personal finance scholarship.