Forget Peer Lending, Get Crowdfunding Instead!

Crowdfunding can be a great alternative to a peer loan for people that need money for a project or business idea.

Peer lending has had a record year and is on its way to becoming a mainstream form of financing for many Americans. Interest rates have come down, making it possible for many to escape the cycle of living paycheck-to-paycheck and expensive credit card charges.

But is peer lending your best financing option? Are you overlooking crowdfunding's tremendous benefits, including free marketing and a tool for customer loyalty?

In fairness to peer loans, I’ve also posted an article, “Forget Crowdfunding, Get a Peer Loan Instead!” on my other blog, Crowd101.

Crowdfunding started as a way for social causes and entrepreneurs to raise money. In a matter of moments, you can launch a crowdfunding campaign page on one of the platforms. Sites like Kickstarter and Indiegogo give you a platform for showcasing your business product or social cause to the world and a way to raise money through their massive audiences.

Advantages of Crowdfunding vs. P2P Loans

The most apparent advantage of crowdfunding is that the money you raise does not have to be repaid. Equity crowdfunding, where you sell a portion of your company to investors, is growing, but most people do well with rewards-based crowdfunding. The money you raise from the crowd is considered donations to your cause or business.

You might raise more money in crowdfunding than is available as a personal loan through peer lending. Personal loans on Prosper and Lending Club

are capped at $35,000 though you can borrow up to $300,000 on Lending Club for a business loan. Ryan Grepper of the Coolest Cooler raised almost $13.3 million through his Kickstarter campaign, the highest funded on the site.

Borrow Up To $300,000 For Your Business. Check Your Rate In Minutes at Lending Club!

Before you get dollar signs floating around your head, take a look at the graph below showing the amount raised for all projects on Kickstarter. While the sky’s the limit for funding, most campaigns (72%) raise less than $10,000. The upside is that you are not limited to how many crowdfunding campaigns you can launch. 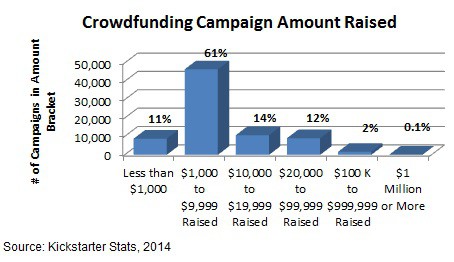 Maybe the most significant benefit to crowdfunding, and likely the most overlooked, is the marketing and feedback you receive on your campaign. Kickstarter has an average of 13 million people stopping by the site every month. That is huge in internet marketing, and even a tiny slice of that can mean big things for your company or your project. The Kickstarter project for Reading Rainbow got more than four million visitors and received pledges from more than 100,000 people.

With a crowdfunding campaign, you get a whole page on the internet to display all the best qualities of your cause or business, including a video appeal. It’s all free, and you get to put it on a website with colossal search ranking power and tons of traffic.

Not only does crowdfunding mean free marketing, but it will also provide valuable feedback on your project. If someone is willing to donate to your cause, there is a good chance they will be ready to volunteer or offer their opinion.

Disadvantages of Crowdfunding versus Peer Lending

Pre-launch crowdfunding, building enthusiasm and a base for your project before it launches, can take three months or more if done correctly. Unless you are just trying to raise a few hundred dollars, expect to spend 10 hours or more each week on your crowdfunding campaign for at least a couple of months.

Starting early and pre-launching your campaign means you can use social media and internet searches to drive traffic. Fail to pre-launch, and you may have to up your marketing budget to bring people to your campaign.

The biggest drawback of crowdfunding is that there’s no guarantee you’ll get anything. About 60% of campaigns don’t reach their funding goal. On sites like Kickstarter, which runs on an all-or-nothing model, you won’t get a dime unless you meet your target.

Other crowdfunding platforms offer a partial payment plan where you keep what you raise in donations, but the fees are usually higher. Check out my ultimate list of crowdfunding and fundraising websites to find out which is suitable for your campaign.

Which is the best way for you to get the money you need? The truth is probably somewhere in the middle. Business owners may still prefer a peer loan for short-term funding while raising money from crowdfunding for larger projects. Individuals may choose to pay interest on a loan rather than develop and manage a campaign to collect money.

Still not sure about crowdfunding? Check out this free crowdfunding video or any of the posts on Crowd101 for everything you need to launch a successful crowdfunding campaign.