How Much Can You Make Freelancing? [And How to Make More]

Freelancing will be the future of work. There are so many factors pushing employment to contractors and freelancers that most people will be working outside the office in the next few decades. Getting ahead of the change with your own freelancing business is the way to go but how much money can you make freelancing?

As a full-time freelancer of three years and many years part-time before that, I can tell you that you are going to love your side-hustle job. I started freelancing as a way to make a little extra money doing something I enjoyed and it’s grown into a full-time career making thousands a month.

Employers like freelancers because they can get exactly the amount of work done without having someone sit in the office wasting time and resources. From internet surfing to coffee breaks and just plain zoning out, the average worker wastes 275 hours a year. Besides the bump to productivity, employers can save on everything from taxes to office rent by hiring freelancers.

But starting your freelancing business isn’t as easy as one day deciding never to go back to work. You can make a lot of money freelancing but it won’t happen overnight. Find out how much you can make freelancing and follow the six success stories below to get started.

How to Make Money Freelancing

As much as I love freelancing, it can be a pain to get started and start making any real money. Sure you can fill out a few surveys and make enough to buy a pack of Ramen noodles…but that’s not going to keep the lights on. Fortunately, the best part about freelancing is that you can start it as a part-time side hustle, building your income on a few hours a week, until you’re making enough each month to pay the bills.

Nearly all my freelancer friends started this way, making money on their hobby at first and then making it a full-time money-maker. For ideas on what you can freelance and how to get started, check out this post on starting freelancing and websites to find jobs.

How much money you make freelancing depends on what you’re doing, how good you are and how long you’ve been doing it…and a lot of hard work.

There are two types of freelance jobs, the skilled work that you get after years of experience…and the stuff that people just don’t want to do. Making money in each type of job is just like the regular job market. You can make money flipping burgers because nobody else wants to but you won’t make much. You’ll make much more money on skilled jobs for which you learn and build a name for yourself.

The truth is that most freelancers, especially newbies, do a little of both types of jobs. The unskilled stuff is easier to get, bringing in quick cash, while you build your name for the skilled freelancing jobs.

Most of these smaller jobs will pay between $5 and $15 an hour though you might be able to make a little more if you can prove your skills go beyond the ordinary. I know people that charge up to $500 for article writing but their ability makes it much more a skilled job than just pumping out 500 words.

Against the low rate, competitive market for the unskilled freelance jobs, the amount you can make for skilled tasks is amazing. I generally charge $50 an hour or more for my work but freelancing for upwards of $250 an hour isn’t uncommon. 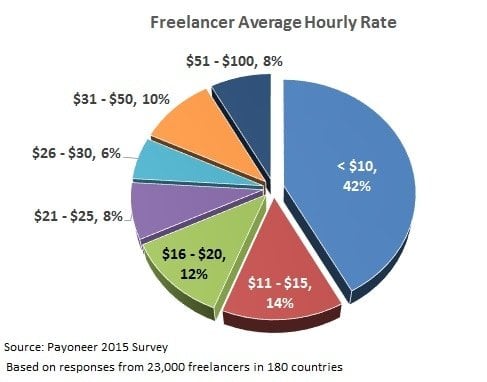 Note that the majority of freelancers surveyed were outside North America with just 2% of respondents in Canada and the United States. This probably skewed results lower and I know many U.S. based freelancers that earn much more. In fact, I would say that the average rate for a native English speaker and a skilled task is closer to $35 an hour or more.

The Payoneer survey also showed freelancing average hourly rate by job though I would say the data is skewed pretty low. I don’t know many legal consultants that charge anywhere close to $32 an hour. 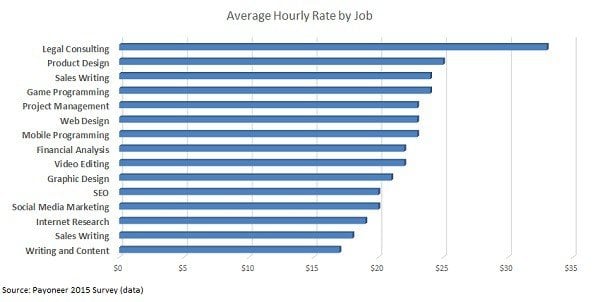 One of the keys to being successful freelancing and making money is to have multiple jobs you can do and working for multiple clients. The Payoneer survey showed 80% of freelancers work on up to three jobs at a time with 12% working on between four to six projects at a time.

I started my own freelancing business in 2006, consulting with Colombian businesses on the upcoming free trade agreement with the United States. To be honest…I hated my 9-to-5 job and just wanted a break. I moved to Medellin, Colombia but needed a way to pay the bills so I spent a few months prior talking to people and finding a few initial clients.

I loved the control I had over my own work and how much I made. You can work for decades in an office and go nowhere if a few people don’t make room for you on the corporate ladder. As a financial analyst, my annual pay raise was capped at 6% and that was only if I exceeded expectations.

I moved back to Iowa in 2008 to work as an economist but it was too late, I had been bitten by the freelancing bug. I knew I eventually wanted to freelance full-time so I started doing investment analysis on the side, writing stock research a few nights a week. It was slow going but a report I wrote got noticed by a Bloomberg journalist in 2011 and I was invited to speak at an investment conference.

After the Bloomberg conference, the money poured in and I was able to switch to full-time freelancing in 2013. One of my best clients was a Canadian venture capital firm that hired me to set up their sell-side research division (that’s just industry jargon for stock research department). I hired and managed a team of six stock analysts writing four to five research reports a month at $3,500 per report.

As with most freelancing clients, the sell-side research job didn’t last forever but I made a ton of money while it did. I’ve since switched to focusing on my five blogs and cut the time I spend freelancing each week but still work about 10 hours a week working for a few clients. I’ll start posting my monthly freelancing income tomorrow with $4,300 made in March in addition to the $2,279 I made blogging and self-publishing books.

How Much Can You Make Freelancing: Six Success Stories

As well as I do freelancing, it’s chicken feed compared to some of my blogger friends. Most bloggers freelance as well as manage their websites. Blogs can make huge money but it takes even longer than freelancing to pay the bills. Check out these six freelancing success stories and how much you can make freelancing. 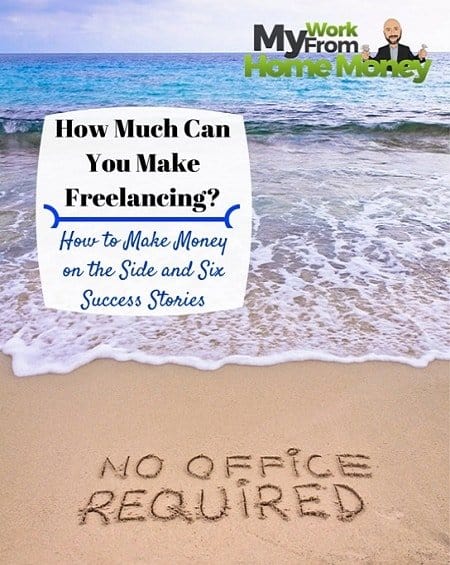 Kate from CashvilleSkyline made over $2,200 on side hustles last quarter while still maintaining her full-time job. Freelance writing brought in $1,550 and she’s gotten to the point where she can narrow her client list a little to personal finance writing and social media consulting.

My biggest challenge is a lack of time. I've found there are unlimited opportunities to earn money freelancing, especially once you start focusing on a niche. However, there are only so many hours in every day. My day job is managing social media for Raven Tools, so all my freelancing happens before work, after work, and on weekends.

Kayla’s posts show that you can use freelancing to really build your blogging income by using the skills you develop on your own blog to help other people on their sites. I just finished a three-month project optimizing and posting for two blogs where I made $2,500 a month for about ten hours a week. Check out our earlier post on how to start a blog to make money every month.

Lena at WhatMommyDoes made $7,495 through advertising and sponsored content last October. Sponsored content may not fall into the traditional definition of freelancing because the articles are posted on your own site but it is money a client pays you and definitely a great source of income. Lena wrote five posts for clients and made $1,700 for more than $300 per article.

I like Lena’s income reports because she tracks the page views as well as income. Even if you don’t post your freelancing income on a blog, be sure to track the different sources of cashflow along with page views or some other metric. You’ll want to track your income against some measure like blog visitors, advertising spend or time spent marketing to clients so you can better understand what works in making money freelancing.

Michelle of MakingSenseofCents left her day job in 2013 and makes huge money freelancing and blogging. Her March income report shows $72,196 with $3,000 of it from freelance writing. She’s built her blog up to a point where she doesn’t freelance as much as she used to though some of her first income reports show upwards of 15% or more from freelancing.

This is the direction I want to go with my blogs. Besides making $70,000+ a month (duh!), constantly dealing with editors and taking on new projects can be a grind after a while. I have a few investment analysis clients that I will work for until I’m shooting pool in the great beyond because I enjoy the work but I find myself focusing on my own projects and less on getting new freelancing clients as time goes on.

Holly has a great ‘Hire Me’ page on ClubThrifty highlighting past work in the Wall Street Journal and Fox Business. It’s just another example of how you can use your blog to drive freelancing work and Holly credits the real change in her freelancing to when she started her blog. Holly and husband Greg make over $20,000 a month, mostly from freelance writing jobs.

Holly recommends new freelancers write guest posts to start getting noticed for freelance writing jobs. Guest posts don’t pay but it will build SEO juice to your website and will get you noticed by others looking for writers.

Holly adds:  As far as rates go, they are all over the board. There are some projects I choose to work on for less because I think they are good for my career. For others, I make quite a bit. Over all, I like to make at least $100 an hour to do anything, and I try to formulate my rates around that. I can usually guess how long something will take me and go from there.

Grayson from DebtRoundup makes money on several sources though everyone in my circle of friends knows him as the IT guy for bloggers. When you’ve been blogging for as long as Grayson has, you pick up a few secrets.

Running five blogs and writing for freelance clients, I don’t have the time or the motivation to search Google for a solution to every tech problem that comes up. There’s a huge market for freelancers that can take a niche in blogging, whether it be tech stuff or social media marketing or whatever, and become an expert in it. Grayson doesn’t report his total freelancing income but his rates for tech VA services have gone up to $70 an hour, not bad for something you can do in shorts and flip-flops at home.

How much you make freelancing depends on a lot of factors but there are more than a few success stories that prove how much money you can make. Check out How to Work from Home to find your passion and what you want out of freelancing then learn from freelancers that have been successful.