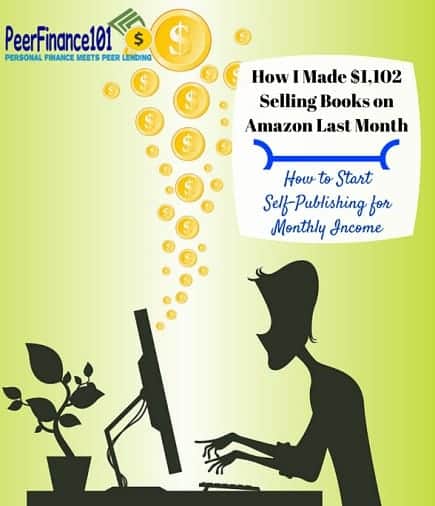 Selling books on Amazon saved my butt last month as other blogging income crashed, find out how to launch your own self-publishing success story

I started my monthly post on how I make money self-publishing and how to sell books on Amazon last month, detailing how I made over $800 in January. Self-publishing has become my largest source of blogging income and looks to be one of the best forms of passive income I’ve seen.

I set a goal of breaking $1,000 selling books on Amazon in February. It took some work but I ended up making $1,102 in the 29 days for a 32% increase over my January self-publishing earnings!

It’s a good thing too because my affiliate income on the blogs took a nosedive last month. Self-publishing income was just 40% of my total blogging income in January. For multiple reasons, some of which I’m still working out and will talk about in this month’s income report, I made almost nothing on affiliate sales last month. It was self-publishing to the rescue and selling books on Amazon ended up being 74% of the month’s total income.

Selling books on Amazon has been a great experience so far and a natural fit with blogging. You’ve already got much of the content or ideas for a book in your blog posts, you just need to refine the ideas and add some material to sell books on Amazon. Your blog can act as a great marketing resource for the books and it’s a monthly source of income that keeps paying out.

How Much Can You Make Selling Books on Amazon?

My own income selling books on Amazon isn’t even close to some of the site’s rockstars but I’m proud of it considering I just started in April 2015. I’ve seen income reports well into the thousands of dollars and even a few self-publishing authors making tens of thousands a month.

The average per book seems to be between $100 to $300 per month though it’s a little misleading. It’s the same across nearly all authors, most of their book sells on Amazon come from a few of their really successful books while most books don’t sell very well. Of the six books I sold on Amazon last month, two of them accounted for 70% of my income. Another book did well and the other three only brought in about $50 each.

This is part of the reason why it’s so important to have multiple books to sell on Amazon. Besides the extra marketing push you get from multiple books, it’s really difficult to know which will do well and which might not. Don’t get discouraged if your first or second book isn’t selling very much. Publish at least four books and see how it goes before giving up on selling books on Amazon.

I had 148 book sells on Amazon Kindle in February. This is the digital side of the self-publishing business and was about 37% of my total book income. You get a higher percentage royalty on your Kindle book sales, as high as 70% on books priced over $2.99, but Kindle books are usually priced lower than paperback and other formats. I price most of my Kindle books at $3.99 so I end up getting about $2.80 per book sold on Amazon.

Besides selling books on Amazon for the money, it’s a good way to get your name out there and drive people back to your website or blog. I know authors that offer books for free or $0.99 to get more sales and reach a larger audience.

I sold another 163 books through Amazon’s CreateSpace paperback service in February. CreateSpace is a print-on-demand (POD) service that prints and mails your books when an order is made. You don’t get quite as much for each book, around 25% to 35% after printing and shipping costs, but it’s been about a third of my monthly book sales income.

What put me over my book income goal last month was my newest format, selling audiobooks on Amazon. Amazon bought Audible in 2008 and makes it super-easy to publish and sell your books as an audiobook. My 130 book sales on Audible were just from the 15th of the month, averaging more than eight sales a day. We’ll run through the process and a few tips for selling audiobooks on Amazon in the second-half of the article.

The pricing is different for audiobooks compared to selling books on Amazon. You set your own price on digital and paperback books but Audible sets the price for audiobooks depending on length. You get 40% of the sales price for regular sales and usually about half that for sales to Audible members using their monthly reading credit. 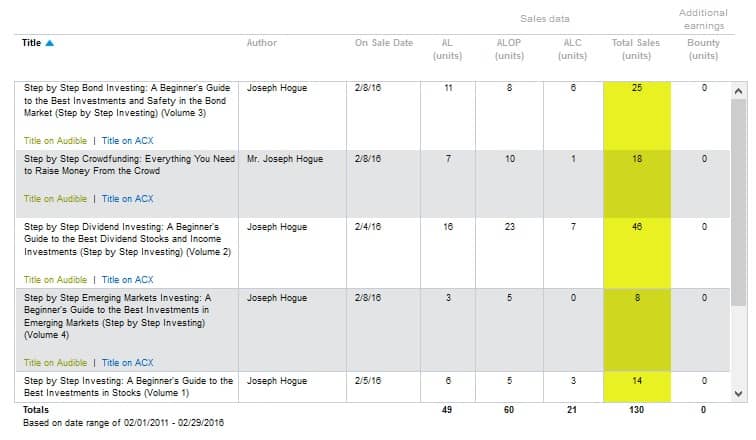 My March goal is for $1,300 from selling books on Amazon. I added a new book, From Zero to Business, in March and the audiobook will be available by mid-month. I’m hoping this new book surprises me and really does well in a few categories I haven’t written as much in yet, bringing a new group of readers to my other books.

For the longer-term picture, I’m hoping to break $2,000 a month this year selling books on Amazon. I’m in the process of co-authoring another book and want to have ten out by the end of the year. I’m still working through the different promotion ideas and would love to hear how you promote your books.

How to Sell Audiobooks on Amazon

Like most good ideas…I waited way too long to start selling audiobooks. I didn’t think my voice was right for recording and I didn’t want to pay high rates to have a voice actor record the books. I don’t know anything about audio production and really didn’t want to learn.

The process for creating and selling audiobooks on Amazon is different from selling traditional books.

1) Read through your book aloud to cut down any clunky sentences and add in any comments that make the reading more conversational.

2) Decide who will narrate your book, where you will record it and who will do the post-production mastering

3) Plan on about three to four hours of work for every hour of finished audio. Normal out-loud reading speed is about 160 words per minute. The extra two or three hours of work will be spent editing and mastering the audio.

4) I would highly recommend recording in an actual studio. You’d be surprised how much noise there is even in a closed room, from outside noises and even the fan on your computer. Background noise is one of the fastest ways to get your audio files rejected by Audible. Record at a studio and you should be able to get a deal on editing/mastering as well.

5) I found sound engineers with tons of experience on Upwork for about $50 per finished hour of production. Add in another $50 per hour of studio time and other costs and you’re at the low end of most estimates I’ve seen for total costs of between $100 to $200 per book hour.

Your income from selling audiobooks on Amazon is going to be different from mine but I’ve made an average of just over $3 per day on each of my six books in the first month of sales. At that rate, you should be able to recoup your costs within six months which is a pretty good investment.

Non-fiction authors should narrate their own books. You know the material and are passionate about the subject. Nobody likes their voice! Unless you’ve actually been told its epically annoying then it’s probably not that bad.

For fiction novels, it’s best to find an actor that can bring out the different roles in a book. Audible makes it easy to find voice actors and studio professionals to record your book but you’ll have to share your royalties or pay an upfront fee.

Once you’ve worked through your book and put together a plan, there are some recording requirements you’ll want to follow. Audible is pretty strict about these so make sure you follow them exactly or you might have to re-record your book.

You must include an opening credits and closing credits that include the title, author, narrator and copyright information. There are specific things you need to say so I wouldn’t stray too far from the script Audible provides.

My opening credits are, “This is the audiobook version of [title]. Written and narrated by Joseph Hogue.”

My closing credits are, “This has been the audiobook version of [title]. Written and narrated by Joseph Hogue. Production copyright [year] by Efficient Alpha and Joseph Hogue. The End.”

You’ll also need a one to five-minute retail sample that will be posted for people to listen before they buy. I usually just use the book’s introduction as it’s a good mix of sales copy and information about the book.

If your audiobook files are approved for sale on Audible, the book will be automatically priced according to length.

It usually takes between four and six days for the book to show up for sell on Amazon and Audible. You’ll receive 40% of the sales price for each book unless you split the royalty with a producer. Audible members can buy books with their monthly credit and the payout tends to be about half of what you normally get.

Selling books on Amazon, especially selling audiobooks, can be a big process but it is a great way to build passive income. I’ve done very little promoting or advertising for my books other than a launch and some social media marketing. You don’t have to put a book out every month but the sooner you get started, the faster your monthly income will grow. I’d love to hear your tips and tricks on how to sell books on Amazon. I’ll be posting a new article each month and will include my experience and tips I’ve learned along the way.