How to Turn 1% into Thousands in Retirement Income

It’s not exactly the kind of statistic that gets people looking forward to their golden years.

But what if you could double that amount without doing anything? Another $300 a month would go a long way, an extra trip each year or eating out with family a few times a month.

It is possible and you won’t have to live like a spendthrift to do it.

Saving just 1% more of your salary into a tax-advantaged retirement plan like a 401(k) or an IRA can mean a huge difference in the money you have available in 30 years.

In fact, it could mean the difference between retiring at 65 and having to wait until well into your 70s.

The best retirement plans are marathons rather than races. Saving hundreds of thousands for retirement can seem impossible but can easily happen with little changes in your savings. “Small steps can turn into big strides,” says Jeanne Thompson, vice president of retirement insights at Fidelity.

How much can your 1% turn into by the time you retire? I’ve put together three examples, hypothetical retirement savers, to show what happens to their retirement income by saving an extra 1% of their salary until retiring at age 67 years old.

Turning a Molehill into a Retirement Mountain 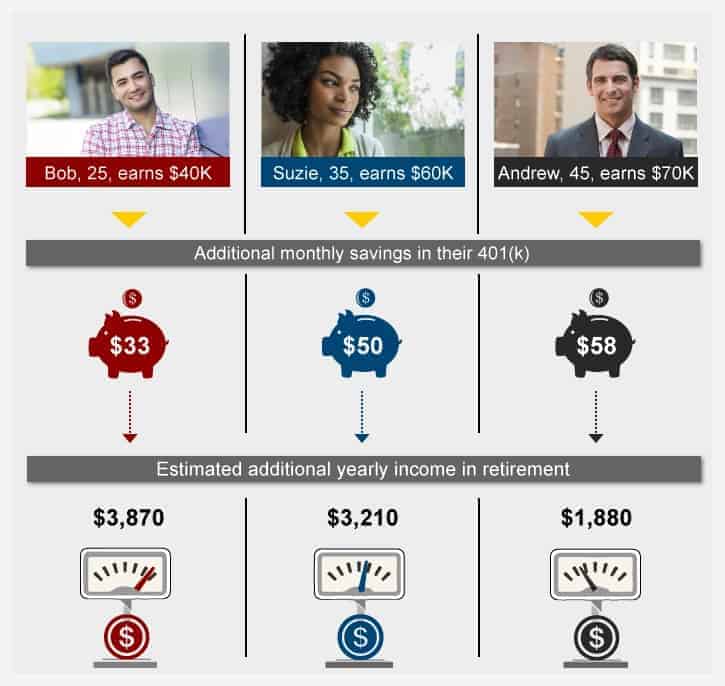 That additional 1% retirement contribution works out to less than $8 a week for the investor earning $40,000 annually. I’m hard-pressed to think of things that cost $8 or less and none of them turn into $4,000 a year in retirement income.

The example works for any retirement account including an Individual Retirement Account. The example above assumes that salary grows by 1.5% annually, adjusted for inflation, and that retirement contributions are increased each year. It also assumes a compound annual return of 7% a year on retirement investments.

The examples assume that the 1% savings rate stays consistent as your salary increases each year. Even better, the additional annual retirement income shown is just a starting point. The extra savings continue to grow through your retirement.

The Power of Retirement Saving

A lot of this benefit comes from the power of tax savings in retirement accounts. These special accounts like 401(k)s and IRAs give you an instant return from the tax deduction. You also get tax-free returns while money is in the account.

Beyond the tax advantages, investors report less stress when investing in retirement accounts. Since the money is locked up until you reach 59 ½, most people worry less about beating the stock market with their retirement investments.

Take a long-term, buy-and-hold investing perspective and let time be your friend to boost your retirement income.

This is all from just 1% in additional retirement contributions, an amount you won’t even notice. Increasing it just a few percent more could mean the difference between vacations in Paris, France versus Paris, Texas!

The younger you are when you get started saving for retirement, the longer your money has to grow on its own. It’s the reason Bob ends up with so much more in retirement income than Andrew, even though the older investor is saving more each month.

But it’s never too late to get started. Even our hypothetical Andrew from above can turn an extra $58 a month in savings into $1,880 a year for retirement.

Which is the Best Retirement Account for Your Needs?

Not having a 401(k) plan available at work doesn’t mean you can’t take advantage of powerful tax breaks for retirement savers. There are retirement savings accounts for self-employed individuals and anyone can open an IRA, even if they contribute to their employer’s 401(k) plan. 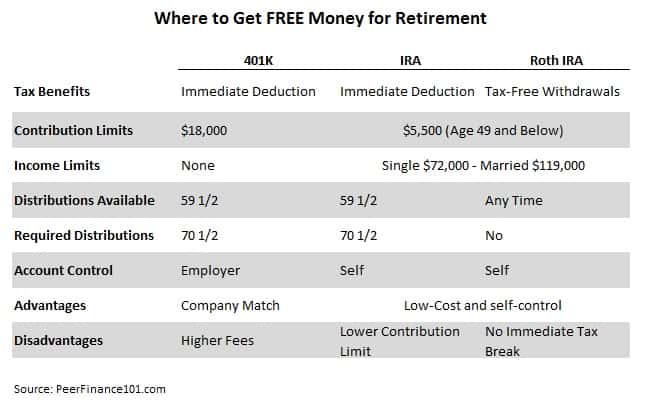 “The key is to save early, and in tax-advantaged accounts,” says John Sweeney, executive vice president of retirement and investing strategies at Fidelity. “That means trying to contribute as much as you can to your 401(k) and IRA contributions when retirement is years away.”

If your employer offers a company match for your 401(k) contributions, max it out! This is the easiest investment return you’ll ever make, even if it means waiting a few years to vest in the amount. Your employer’s match of 50% is like an immediate double-digit return on your money.

While there are ‘rules-of-thumb’ for retirement planning like the 4% withdrawal and the idea that your post-retirement expenses will be about 80% of your previous spending, everyone’s retirement situation is unique. 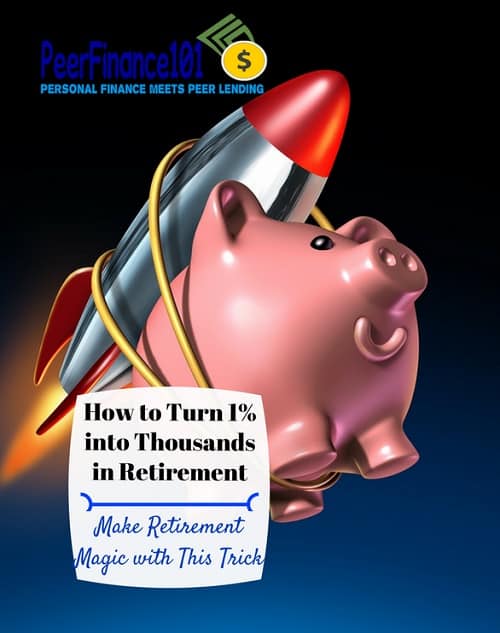 The most important thing you can do is to make retirement planning real by sitting down and visualizing your goals. Understand what retirement looks like to you, exactly how much you’ll need and what it means for your retirement savings.

Most people suggest saving between 10% to 15% of your income for retirement and other financial goals, including the amount you contribute to your 401(k) plan.

That doesn’t mean you have to get to that number immediately or that your retirement dreams are out of reach if you’re not there yet. We’ve seen how saving just 1% can turn into thousands more for retirement spending so that’s a great place to start if you’re having trouble saving.

The marathon analogy for retirement saving is a great one. If you try sprinting from the starting line, you’re just going to get tired and might not finish. Start saving for retirement gradually, at a pace you know you can keep and then increase the amount over time.

Retirement may seem too far away to matter, especially for younger savers. That’s when it matters the most and when you have the biggest opportunity to boost your retirement income. Start early or start now, either way little changes in your retirement savings can have a big effect.