3 Ways to Save Thousands from the Trump Tax Cuts

Your taxes are going to change under the new tax reform, do you know how to make the most of it?

Regardless of the politics around the Trump tax cuts, it’s going to mean new opportunities to keep more money in your pocket…if you know how to work the system.

Most people will see a tax cut in 2018 because of the higher standard deduction and lower rates in most brackets.

As it’s always been with the tax code, you can save even more if you know what to watch for and how to use it.

I’ve created this video and post around three ways you should be using the 2018 tax cuts to save as much money as possible.

I'm going to be adding a lot more great personal finance videos to the YouTube channel this year including a weekly Q&A video to answer your questions about beating debt, saving more and reaching your financial goals.

I'm excited about reaching the community on a whole new level through these videos. Click through to subscribe to the channel so you don't miss a single video.

Tax Cut Basics that Will Save You Money

I get excited whenever I see the government do something because I know there will be a way to benefit from it if you know how to play the game. Whether this new tax plan ends up boosting the economy or lowering taxes for most people, it will save you money if you know what to do.

There are quite a few more changes in the tax plan for companies and I published a video on how investors can find winners on the My Stock Market Basics channel. Check it out because one of the surest ways to benefit from the Trump tax cuts is to be an investor.

We’ll stick to changes for individuals here. The new tax plan keeps seven levels of tax rates but increases the income limits in each and lowers the rates a little.

The tax reform also doubles the amount of the standard deduction to $12,000 per person but it eliminates the personal exemption of $4,050 so you really only see a benefit of about $2,000 off your reported income on this one.

The standard deduction and exemption are amounts you take off your income before calculating how much you owe in taxes so a higher amount lets you keep more of your money.

All this talk about exemptions and deductions can be confusing but there are ways you can make the new tax plan work for you. I want you to focus on three ideas here, three ways to keep more money in your pocket.

First, consider opening a Roth IRA account for your retirement. Most people are familiar with a traditional IRA or a 401k where you get an instant deduction from income for the money you invest but then have to pay taxes on all that money when you take it out in retirement.

For example, if you invest $1,000 in a traditional IRA then you can deduct that money from your income and not pay taxes on it. If it grows to $1,500 by the time you take it out in retirement, you pay taxes on $1,500 as if it’s income.

You make contributions into your Roth IRA account with after-tax money. You don’t get that immediate deduction but you get to take all your money and profits out tax-free in retirement.

So you pay taxes on that $1,000 you invest in a Roth IRA account now but when you withdraw the $1,500 in retirement, you own no taxes. You NEVER owe taxes on the return you earn.

Why this is important here is because there is a very good chance that tax rates are going up in the future. The deficit is skyrocketing, this tax plan will only make it worse, and all the entitlement programs like Medicare and SSI are bankrupt. Besides the fact that the government will need more money in the future to pay for all of this, the individual tax rates are set to go back up in 2025.

Pay your income taxes on money now at these lower rates and enjoy tax-free income in the future when rates are higher.

Be an investor! The payoff for the middle class in this tax reform is up for debate but what is clear is that businesses are getting a huge payday.

A study by the University of Pennsylvania estimates that U.S. companies will pay an average effective tax rate of just 9% in 2018 after all deductions are accounted, that’s less than half the 21% average effective rate they pay now.

Between the lower tax rate and other giveaways to companies, one guaranteed way to benefit from the tax reform is to be an investor. Companies are going to be growing and returning massive amounts of cash to investors even if the economy goes nowhere in 2018.

How to Triple Your Tax Cut

My final way to benefit from the tax plan is going to save you lots of money without having to do anything at all.

How much you save is going to depend on a couple of things, but most taxpayers will save at least a few hundred dollars a year.

Save it! This is money you wouldn’t have had otherwise so it’s not like you’re going to miss it. The average family saves less than $4,000 a year according to the Census and that’s nowhere near enough to meet your retirement goals.

Most of your tax savings is going to be in your paycheck from lower withholding so figure out how much your check is on average and save the increase each week. Saving just a $1,000 extra a year for the next ten years will grow to more than $31,000 by the end of 20 years.

That’s on top of your regular savings and a profit of $20,000 on just ten grand of savings, savings that you won’t miss. 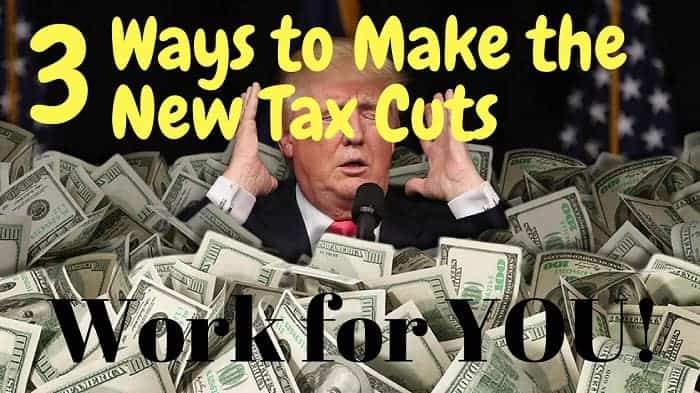 Now understand that the changes in the tax plan for individuals are set to go back to where they were in 2025. Congress is promising that future legislators will keep the cuts, but you know how well you can trust politicians so get your savings in while you can.

Don’t let this once-in-a-generation opportunity to save on tax cuts pass you by. The Trump tax cuts won’t benefit everyone and won’t last forever. You need to be looking at this tax package and understand how to keep as much as your money while you can.

How to Financially Survive a Job Loss

3 Financial Goals Everyone Needs to Make in 2020