I've paid over $100 a month for cable TV for, well forever. I watch about 10 of the channels regularly and a couple more only occassionally, and that's it.

Honestly, I probably spend more time flipping through the channels I don't watch than I do actually watching TV.

With a single decision, I saved more than $80 by “cutting the cord” and streaming my shows and movies—live and on-demand. I switched to Sling TV, a premium cord-cutting service similar to Netflix and Hulu.

Unlike some other cord-cutting services, you get to pick your channels with Sling TV packages so you don't end up flipping through channels you'll never watch.

You might also like Sling TV if you’re tired of dealing with the cable TV contracts that raise your rates every year unless you call and threaten to cancel your service. With Sling TV, you pay the same flat rate each month, and you can pause your service for a busy month without penalty.

Sling TV can be the cable TV alternative you’re looking for to save money but still have access to your favorite programs. I put together this Sling TV review of my experience and how the service works.

Why is Sling TV So Cheap?

Sling TV streams live and on-demand cable TV programming over your internet connection. Because Sling piggybacks on the bandwidth of your internet provider instead of maintaining cable trenches and satellite distribution networks, they can pass the operations savings onto you.

Sling TV is owned by Dish Network. Despite being owned by a satellite TV provider, you prepay each month and are never bound to a contract.

Another reason Sling TV is so cheap, is they offer “a la carte pricing” with competitively priced skinny bundles. Most cable plans come with over 100 channels, but you probably only watch 20 or 30 channels consistently. Sling offers two basic packages—Orange and Blue—and you can purchase themed add-ons for $5 a month to get access to additional channels groups like sports, movies, or children’s programming.

Unless cable is included in your home internet and phone bundle, Sling TV should be notably cheaper than what you currently pay for TV.

How do You Watch Sling TV? 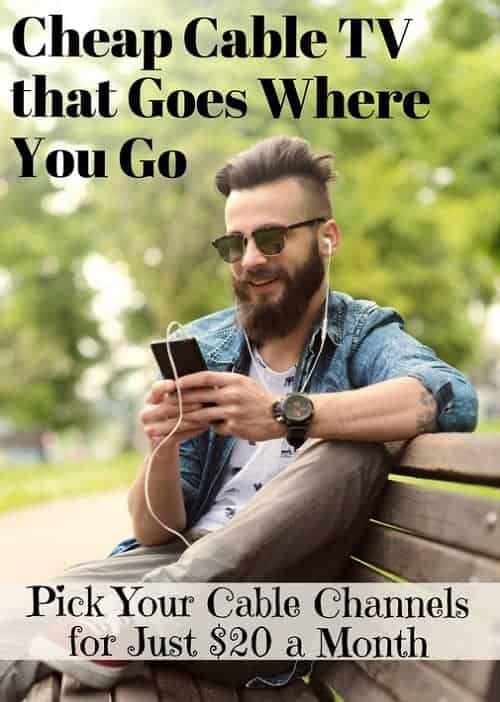 Sling TV works on just about any digital device that connects to the internet including:

What internet speed you have is also very important. Sling recommends the following bandwidth speeds to watch your programming without interruption or buffering:

Household wifi is virtually commonplace for most families with multiple phones, computers, and TVs connected to the network at once. Even if only one internet-connected devices is currently watching Sling TV, it’s recommended to have at least 25.0 megabits per second for optimum viewing.

We have a basic internet package in our home and I've never had a problem streaming Sling on my tablet or TV. Every once in a while, I'll find a public wifi connection that is a little slow but it's pretty rare.

When you first sign up for Sling TV, you have the choice between three basic channel lineups:

Most cable and satellite companies usually add more channels as you upgrade to a more expensive package. That’s not the case with Sling TV. Even though you get at least 15 more channels with the Blue package, you won’t get ESPN and Disney for starters.

If you want to keep your monthly bill below $30, you’ll need to decide which package is better for you. We've actually upgraded to the Orange and Blue package to get more channels and it's still more than $60 savings from our old cable bill.


Sling Orange is the most affordable way to watch ESPN or Disney that I know of. In addition to these two channels, you will also get access to a variety of movie and entertainment channels:

You won’t get access to your local TV channels with the Sling Orange package. Even with the Sling Blue package, you’ll potentially get your local ABC, Fox, and NBC affiliate but plan on investing $20 into an HDTV antenna to pick up your local channels; regardless of which Sling package your choose.

Also, you can only watch Sling TV with one device at a time with the Orange package. To watch on multiple devices, you must opt for Sling Blue or the combo Orange and Blue package.


Provided you can go without ESPN or Disney, Sling Blue can be a better option for sports and entertainment fans. There is some overlap between the Orange and Blue packages like Comedy Central, Cartoon Network, and HGTV, but you can also get access to these channels:

You can also get access to on-demand programming from the ABC, Fox, and NBC local networks to watch new episodes of current shows and classic shows like Seinfeld and Friends. Depending on which TV market you live in, you might be able to watch live programming from your local affiliate too.

With Sling Blue, you can watch Sling on up to three devices at once. Up to four devices can watch simultaneously with the Orange and Blue package.

You might be happy with either the Orange, Blue, or Orange and Blue combo package, but you can also add “a la carte” packages starting at $5 per month.

One package you may strongly consider is the Cloud DVR that costs $5 a month. Unlike cable where DVR is now standard in most cases, you still need to pay extra with Sling. Still yet, you’re saving a bundle.

Here are a few add-ons you can choose from:

In addition to these regular cable channels, you can also add premium movie channels including HBO, Showtime, Starz, and Cinemax as well for $9 to $15 per month for each network.

Sling TV does a good job of offering something for everyone without breaking the bank. If you can get all the channels you want and save money, Sling can be one of the easiest ways to cut spending without sacrificing your quality of life.