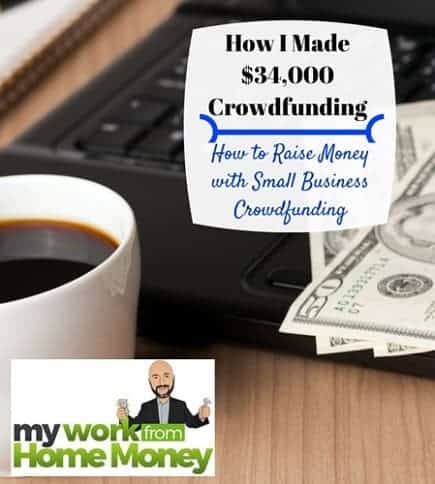 Rennik Soholt shares his story of how he raised $34,547 and how you can make money crowdfunding

I’ve gotten a lot of questions about crowdfunding since last week’s webinar with small business community Manta. Week two of our five-week series on how to make money online covered some of the details in using crowdfunding to launch your dream project but I wanted to follow it up with real experience from someone in the community and how you can make money crowdfunding.

We’re building a huge community on YouTube to beat your debt, make more money and start making money work for you. Click over to join us on the channel and start creating the financial future you deserve!

What was your crowdfunding campaign?

My goal was to raise $30,000 to complete production and some post-production for my documentary, “Forced Change.” I have been working on the project for more than ten years, following the lives of a group of people that were forced to leave their homes in New Orleans after Hurricane Katrina.

I had heard that crowdfunding was opening up as a resource for independent films and that you could make money crowdfunding to complete a project.

Did you try to raise money from other sources before crowdfunding?

I tried to raise money from some grants but many organizations want you to apply multiple times before even looking at your project, especially if you do not already have several grants under your belt.

I’ve seen this kind of story across so many industries and it is one of the biggest ways crowdfunding is changing the environment for business and projects. You no longer need high-profile connections in Hollywood or venture capital friends in New York to raise money and get your idea off the ground.

Small business lending from banks has dried up since the recession but crowdfunding is picking up the slack. It isn’t free money and you’ll still need to put in the work to reach the crowd but it is definitely a legitimate source from which to raise money.

Click to reserve your spot at the FREE YouTube Quick-start Webinar! I'm sharing three strategies that helped me grow my YouTube channel and double my business income, and I guarantee they WILL work for you. Seats are limited for the webinar, so make sure you reserve yours.

What did you do before the crowdfunding campaign to get ready?

I actually wanted to launch the campaign in November but held off until February to better prepare. I talked to everyone I knew to build excitement for the campaign ahead of time. My team on the documentary really worked to build up an online presence through Twitter, Instagram and Facebook.

We reached out to organizations like non-profits who’s goals were related to ours, from global warming to rebuilding in New Orleans. All of this really helped to get the word out and I think to make more money on the campaign.

I reached out to local New Orleans groups and businesses for creative rewards to offer the campaign supporters. I also contacted journalists and bloggers with an interest in the film or the topic to see if I could get some buzz created.

Launching the campaign this year had the added benefit of coinciding with the ten-year anniversary of Katrina and media attention around it.

Rennik did a great job pre-launching his crowdfunding campaign, the most important stage in crowdfunding and neglected by too many campaigns. His pre-launch outreach helped him raise nearly 20% of the campaign’s goal in just the first two days crowdfunding. That 20% isn't a magic number but it is important because many people see it as the trigger that can get your campaign featured by the crowdfunding platforms.

Besides the pre-launch buzz that Rennik created, he also found donors to help with match-pledge campaigns throughout the campaign. On three separate days, he emailed out to supporters that a donor was promising to match all pledges received that day. It really drove pledges higher on a few days and kept momentum going.

What has surprised you about crowdfunding and the money you can raise?

The amount of time it takes for a crowdfunding campaign has been a surprise. I spend about eight hours a day and a little on the weekends managing the campaign. I think I could have set up some more timed press ahead of the campaign. I would have liked to be ready with some articles or blogs posts to come out on the first couple of days of the campaign. I now understand what people say by, “You can make money crowdfunding but it comes at a price.”

The process and time required for a successful crowdfunding campaign does surprise many people. The process isn’t terribly complicated but just takes time to establish an online presence and build relationships with a community of supporters.

Most campaigns I talk to spend around 15 hours a week managing their crowdfunding campaign but a lot of it depends on how much time you put in during pre-launch. It is something I spend a lot of time detailing on the blog and in a new book, Step-by-Step Crowdfunding.

Even with the busy hours before and during a crowdfunding campaign, it is still well worth the effort. There are few other ways to really raise that much money for a project along with some great marketing benefits that you’ll be able to leverage well after funding.

We’ve done more than a dozen campaign reviews on the crowdfunding blog, all a different story of how people are using the new online movement to make money crowdfunding their projects.

Liam shared his experience crowdfunding his first book to combine his passion for super-hero comics and science fiction. Liam beat his funding goal to raise $2,834 from 55 backers on Kickstarter and already has sequels planned for his book.

Liam’s story is great because it shows that you do not have to raise tens of thousands for a successful crowdfunding campaign. He set his goal lower to meet his needs and got some great exposure for his book.

Just using typical crowdfunding statistics on visitors and supporters, Liam’s campaign page easily got thousands of views and more than a few new fans to his super-hero, sci-fi series.

Luciana Scarabello raised more than $20,000 to follow up on her success as a contestant on NBC’s Fashion Star and fund her spring 2015 collection of stylish activewear. She ran into a lot of the common problems that I see in crowdfunding campaigns but was able to work through them to meet her funding goal.

All three of these campaigns prove that you can make money crowdfunding. Crowdfunding has emerged as a great opportunity whether you need a thousand or tens of thousands to launch your dream project, business idea or social cause. Nearly 81,000 projects have been successfully funded on Kickstarter alone with more than $1.6 billion in pledges. Learn how you can make crowdfunding part of your side-gig and get the money you need.

Crowdfunding is a popular way to raise funds for a product or a service. Unlike other forms of fundraising, the campaign is run by the individual or business themselves. It can be a great way to get your product out there and make money from your passion project.

The advantages of crowdfunding are that it is an easy way for people with an idea to get funding. You can also use crowdfunding as a marketing tool, through this method you can build up your reputation and network of potential investors. Lastly, it is more accessible than traditional fundraising methods due to the lack of application process and restrictions on who can invest.

Crowdfunding is a way for entrepreneurs to raise funds from the general public. It is one of the fastest-growing sources of financing in the world, and has become an increasingly popular way for startups to raise money.

The advantages of crowdfunding are numerous. It provides entrepreneurs with an opportunity to build trust with potential customers, it can help them find new markets or customers, and, finally, it can provide them with the necessary funds to start their business.

Crowdfunding is a form of crowdsourcing where people can directly contribute funds to a project, business venture, social cause, or charity. Crowdfunding has been used to support startups and entrepreneurs with their ideas and to facilitate access to finance by start-ups and SMEs.

Patreon is a crowdfunding website that allows members of the public to make monthly contributions to artists and content creators in exchange for exclusive rewards such as art installations, unpublished books, and personal interaction.

The benefits of crowdfunding campaigns are: