How to Pay Off Debt Quickly: Two Strategies to Motivate and Save

Two debt payoff methods to pay off debt quickly and how to pick which is right for you.

Even if you can find the extra money in your budget, how do you stay motivated to pay off debt every single month? How can you pay your debt off quickly so you don’t fall back into that trap?

By the end of this video, you’ll have two debt strategies that will save you thousands and keep you motivated to keep going.

In fact, I’m going to show you how adding just $25 a month to your debt payoff will save almost ten grand in interest and take years off your payments.

Today’s video is the fourth in our debt payoff series, an entire series on ditching your debt from creating those goals that are going to motivate you to some tricks I’ve learned to make saving easy.

Think of it like a TV series, at the end of this season, you will have all the tools you need to finally get out from under that crushing debt. Make sure you subscribe so you don’t miss any of the episodes. I’ll also be putting these videos in a special list in the Playlists section of the channel so you can watch all of them in order.

At this point, we’ve created those goals that are going to motivate you and made them real by creating a mental picture. We found an extra $240 a month in any budget in our last video, now all that’s left is to start attacking that debt.

Playing Games with Your Debt to Get Free

But really destroying that debt is more than just making extra payments. Before we get to those two strategies that are going to save thousands and motivate you, I’m going to show you why prioritizing your debt is so powerful

Paying off thirty grand at a 14% rate is going to cost you $71,520 over 15 years. more than double what you borrowed and that’s if you’re able to afford the monthly payments and don’t get sucked right back down into debt again.

Just think of that, for about half the amount you wasted on that shake weight, you can destroy your debt.

Another popular debt strategy is making two payments a month instead of one. Now this one doesn’t even include putting any extra money to the payoff. Just splitting your monthly bill in half and paying every two weeks. That’s going to save you more than $10,700 and over three years of payments.

So now that you’re excited, you’re pumped to see those two strategies that will help you pay off debt quickly, let’s get to it. I’ll start with the most popular strategy first and then talk about my favorite method, one that you might not have heard of.

How the Debt Snowball Method Saves You Money

The debt snowball method is more popular and for good reason, it’s going to save you the most money. But that doesn’t necessarily mean it’s going to be the best for you.

Here’s how the debt snowball method works. You list out all your debts, write out the amounts and interest rate for each. Then you arrange these from highest rate on top to the lowest rate.

You continue to make all your normal payments but you make any extra payments to the one or two debts on the top of your list, the ones charging the highest interest rate.

Notice that the list here is only ordered from highest to lowest rate, amount owed has nothing to do with it.

Because you’re paying off these more expensive debts faster, you’re saving money on that interest. That top credit card debt at 24% is costing you $300 more a year than the car loan at 9%, even though the amount owed on the car loan is almost twice as much.

Yeah, that means you’ll still have the low-rate debt like your mortgage on there for a while but you’re getting rid of the debt that’s really busting your budget.

Now I’m big into saving money, I mean this is a guy that’s wiped his ass with junk mail instead of buying toilet paper, so maybe it’s going to surprise you to hear that the snowball method isn’t my favorite strategy to pay off debt quickly. 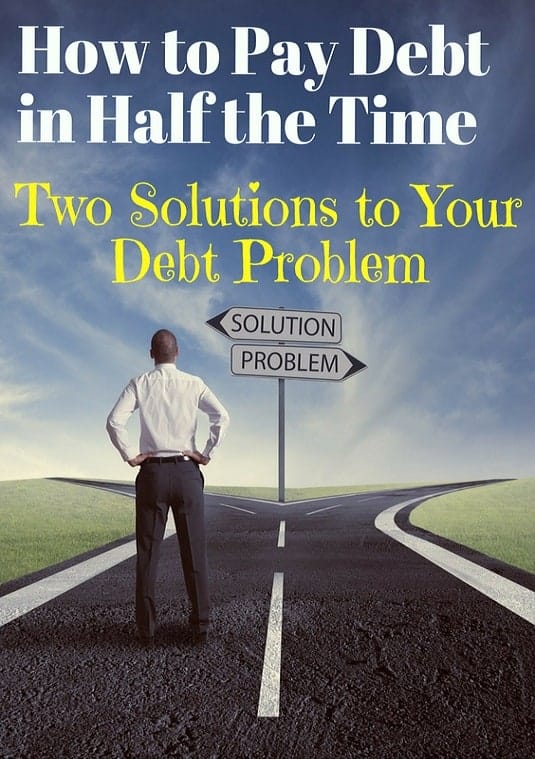 My favorite is actually our other strategy, the debt avalanche method.

Here instead of listing your debts by interest rate, you list them by amount owed from lowest to highest. With this method, you make extra payments to the smallest debts first.

By focusing on those smaller debts, you’re going to be paying them off faster.

In the snowball method, it might take you a year to pay off that $3,400 credit card even with an extra $200 a month but paying off that $2,000 personal loan might only take a few months.

Let’s be clear, the snowball method will save more money paying those high-rate debts quickly but it is so motivating to watch those debts drop off your list fast with the avalanche method.

And when one of the biggest problems for people in debt is just sticking to a plan and making those extra payments, you need all the motivation you can get.

I would gladly trade a few hundred more in interest charges for the motivation to keep driving to my debt free.

An Important Point in Picking Your Debt Plan

The important point in all of this is that you keep paying off your debt, you keep that mental picture we developed in the first video and use it to motivate you to keep saving.

I’m excited. We’re just four videos into our debt payoff course and you’re already on your way to being debt free.

Our next video in the debt series is going to be a controversial one. This is one that a lot of debt gurus don’t want me to talk about but I’ve used it in my own debt payoff and it can save you a lot of money. Next week, we’ll be talking about consolidation loans. How to make your debt payoff more easily manageable, help increase your credit score and cut out the credit card companies for good.