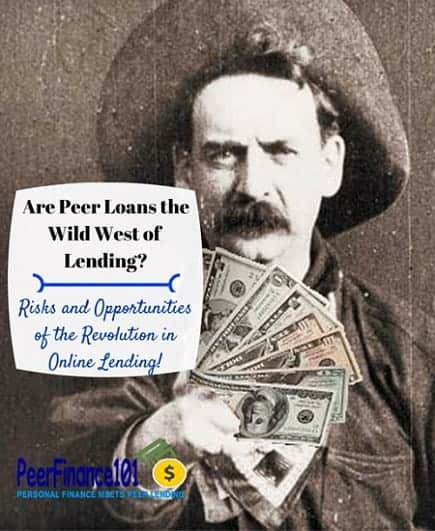 Is perception of peer lending risks scaring people from the revolution in American finance?

The old west analogy is used way too often in my opinion. You don’t have to listen to the news for long before someone makes the comparison between a local neighborhood and the American west of the nineteenth century. So when people started comparing peer lending risks with the lawlessness of the Wild West, I had to think about it for a moment.

And you know what, they’re right! It turns out that the revolution in peer lending is a lot like the old west, but probably not in the way you imagine.

While expansion into the western territories dates back to even before the Louisiana Purchase in 1803, much of the old west as we know it was born out of the tragedy of the Civil War. Unemployment jumped to over 10% after the war and the hope for opportunity in the west convinced a massive exodus into the new states and territories.

While peer lending preceded the Great Recession, the movement in online loans has really been reborn since the collapse of the financial system. Personal loan sites like Avant and Personalloans.com have been providing lower-cost options to payday loans for years but have only just begun getting noticed. Seven years after the end of the recession, banks are still refusing to loosen credit standards so regular people can get the money they need.

In the most recent survey of loan officers by the Federal Reserve, just 12% of banks said they were “somewhat more willing” to grant consumer installment loans over the past three months and 3% said they were less willing. This reluctance to open the purse strings at major banks flies in the face of what happened during the financial crisis.

I find it a little ironic that taxpayers like you and me bailed out the banks with hundreds of billions only to see regular people get denied for a few thousand dollars on a home improvement loan. Banks have gone from funding 47% of U.S. home mortgages in 2007 to filling just 29% of that demand today.

Of course, there will be no lost love for the banks when peer lending becomes mainstream even despite some of the peer lending risks. Foundation Capital reports in its Marketplace Lending Whitepaper that fewer than 1 in 10 customers of national banks would recommend their bank to others. If that were not enough, disdain of banks goes even deeper with the younger generation. Seven out of ten millennials surveyed say they would rather go to the dentist than listen to what banks are saying.

The Great Recession drove a wedge between Americans and the traditional banking sector. Peer lending is stepping in to fill demand for loans that bank loan officers are not willing to approve.

Expansion into the American west surged on the completion of the Transcontinental Railroad and the Homestead Act. The connecting of east and west by rail represented a leap in communications and mobility for everyday people. The Homestead Act granted free 160-acre lots in the unsettled west to anyone that filed a claim, lived on the land for five years and improved it through building.

Peer lending looks to be every bit as transformational as the rail connection was nearly 200 years ago. Lending Club started in the traditional personal loans space in 2006 but has expanded into small business loans and medical loans. The site is using its cost advantage in loans to double loan origination every year and issued stock on the New York Stock Exchange in 2014.

Peer lending is connecting investors directly with borrowers in a way that has never been done before. Investing in bank loans is nothing new. Investors have been buying portfolios of loans for ages as a safe source of income but they always had to go through a bank or a brokerage firm to do it. In fact, many of the peer lending risks are risks borne by any type of investment.

By connecting investors and borrowers directly, the peer lending industry is providing a new opportunity for Americans to reach their financial dreams. Peer loans can be used for just about anything with 5% of loans dedicated to home improvement. In the not-so-distant future, it is likely that peer lending will move into secured-forms of lending like mortgages and auto loans as well.

According to Foundation Capital, branch offices account for more than 30% of a bank’s total operational spending and there is a limit to how many applications a loan officer can review. By reducing physical overhead costs and other middleman charges, the peer lending platforms can generate cost advantages of 4% or more. Those cost advantages can be passed down to borrowers, saving thousands on loans.

Not only are there cost advantages but peer lending is light years faster for both investors and borrowers. For borrowers, filling out the application can take as little as ten minutes and you don’t have to put on your fanciest suit and tie to impress the loan officer. The verification process can take another day before the loan goes active on one of the lending sites. Many loans are funded within a day or two and after you send in a few more documents for identification, the funds are transferred to your bank account. The entire process can take as little as five or six days.

For investors, the difference in time for a peer loan investment compared with the traditional route is extraordinary. In traditional banking, after a borrower takes out a loan, that loan is packaged by the bank and sold through securitization. Basically, another company says I will take this loan portfolio off your hands for a price and resell it as an investment product. The securitized portfolio is then split up into different risk levels and rates and individually sold off to mutual funds which then sell the product to investors.

And guess what, someone is taking a percentage cut at every step of the process.

Not only is peer lending nearly instantaneous for the investor but there is only the peer lending platform there to take a fee for facilitation, credit verification and payment processing.

For investors, there is another oft-overlooked benefit to peer lending; the ability to be in charge of your own investments and know what you are getting with each loan. Remember what caused the collapse of the financial system in 2008? The banks packaged and sold off their subprime loans but no one really knew what they were buying. When undocumented loans that were based on nothing more than fictitious income went sour, the whole house of cards came crashing down.

Peer loans are verified through multiple avenues and you see right in front of you what you are getting with your investment. For investors, peer lending risks are far fewer than the risk taken with other investments in stocks and bonds.

Peer Lending Risks? Sure but Leave the Drama for your Mama

Was the old west a dangerous place? Sure, to an extent but no more risky than what we face today. The myth of the old west has been so dramatized on television that all we know are saloons and six-shooters. In fact research can only find evidence of about eight bank robberies across 15 states in 40 years of the late nineteenth century. Compare that to the 5,600 bank robberies in 2010 alone and tell me which is a more violent time to find yourself.

Most people living back in those days simply went about their lives looking for their little piece of the American dream, a lot like we do today.

Are there peer lending risks to avoid? You bet. There will always be risks when using credit or when investing your money. And much like the old west, peer lending risks are sure to be dramatized by the media. News stories will highlight one or two people with an amazing story of greed or anguish. They will tell their tale of heartbreak and how they were deceived by the peer lending movement.

But what about the stories you won’t hear? Like Steve Clements, a peer lending investor I interviewed here, that has made a return of more than 12% annually while building a safe portfolio by following an investing strategy based on simple criteria. What about the hundreds of thousands of borrowers that have been able to pay off high-interest credit cards or to create the home of their dreams with a peer loan? The reality is that peer lending risks are no different than any other risk to borrowing or lending money.

But we cannot ignore peer lending risks. Just like using any type of credit, there are risks for borrowers. As with any investing in stocks or bonds, there are risks to investing in peer loans as well. Just like any type of investing, you can avoid the risks in peer loans by following a sound investment strategy based on your tolerance for risk and your requirement for return.

Thar’s Gold in them Thar Hills of Peer Lending!

The oft-overlooked aspect of the old west analogy is the great opportunity that offered itself to regular people. You didn’t need to be the son or daughter of Rockefeller or Carnegie, you just needed a dream and a little hard work. Land was available for the taking, you just had to work it and reap your reward.

I don’t want to mislead anyone, peer lending is not a get-rich-quick scheme. I doubt that anyone will find the key to making millions overnight or to free money for the taking. Like any loan, you still have to pay back a peer loan. Like any investment, rational investors need to hedge their risks smartly and accept reasonable returns.

But I don’t want to underestimate the opportunities in peer lending either. Through a competitive investor environment, borrowers are finding the money they need to pay off high-interest credit cards and turn their house into a home. Investors are finding a reliable source of income and rates that will beat just about any other income-producing investment on the market. Think you are going to retire on the 2.3% rate paid on treasury bonds? Not likely but your retirement dreams become a lot more like reality on returns of 9% and higher on a portfolio of peer loans.

Personal opportunities are only half the story with the revolution in peer lending. The economy runs on a reliable flow of credit to consumers and businesses. Banks are allowed by the government to only keep a fraction of their deposits on hand if they are willing to make loans available and help increase the size of our economy.

As of October 2014, U.S. financial institutions were sitting on $2.6 trillion in cash above the amount they needed to hold for federal requirements. That is $2.6 trillion, about 15% the size of the entire economy, that could be loaned out but is just sitting in bank vaults because of overly strict lending standards. This is all happening while the economy struggles to grow at a 3% annual rate.

Imagine if we took that money out of banks and lent it out through peer lending. Any peer lending risks are far outweighed by the benefits to borrowers, investors and to the economy.

So add mine to another tired usage of the old west analogy if you must. Overused as it may be, there are some striking similarities with peer lending risks. The market for peer loans is growing by billions a year and connecting borrowers directly with investors to help each make their financial dreams a reality. Met with odd glances now, in a few years I doubt that anyone will think twice about borrowing online or investing in peer loans.

And someday, they may just talk about the wild days of the peer lending frontier.

For a more information about the peer lending platforms, check out my earlier post, Peer Lending Sites Reviewed