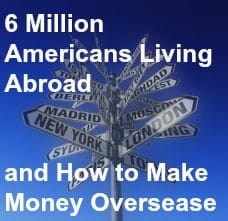 More than 6 million Americans living abroad are enjoying a more relaxing life. Know the pros and cons of living abroad and how to get paid living overseas.

The Association of Americans Resident Overseas reports that 6.3 million Americans have made their home outside the United States. That’s upwards of a 50% increase since 2008 when estimates were for about four million living abroad.

After spending five years as an economist for the State of Iowa and the birth of our first son, my wife and I decided to be part of this growing trend of Americans looking for something else…somewhere else.

Living abroad isn’t everything the travel blogs make it out to be and many find it too hard to adjust to a different culture or language. Make sure you understand the pros and cons of being an expat and know what to expect before you make your own choice.

Political ideology is often blamed as the reason for an ever growing emigration of Americans but I really haven’t seen it among the people I’ve known. Sure, I’ve talked with more than a few people that just couldn’t stand how Congress was leading the red, white and blue but it’s a secondary reason for most of them leaving.

Living in Latin America (Medellin, Colombia) where the Latino culture of work-to-live is in contrast to the American idea of living-to-work, the most common reason I hear is just to live a more relaxed lifestyle. You also get a lot of people coming to enjoy the culture and language of a country that has not been quite as anglicized as the more popular destinations like Costa Rica and Panama.

Your own reason for living abroad will need to coincide with the reality of where you want to live. Your destination could vary quite a bit depending on whether you want to work locally, go to school or how similar you want things compared to the United States.

Why More and More Americans Decide to Live Abroad

So what has changed in today's global community that makes more Americans want to leave their country of birth and take up residence in another? There are several factors involved, but freedom of movement (across borders) globally is a factor that cannot be ignored. More specifically, America's stance on personal liberty within its own borders compared to other countries is a major reason why it ranks number one for expatriates from all over the world.

More Americans choose to live abroad for financial reasons as well. Numerous companies are now global companies without regional boundaries, providing job opportunities to work abroad with the same company for which one would have worked in their home country.

Globalization has allowed more people to pursue international careers that are less dependent on location, further allowing them to live abroad. Governmental stability is another factor Americans consider when deciding where they want to move overseas. Countries with oppressive governments tend not to rank high on most expats' lists of desired living destinations. However democratic countries with varying degrees of governmental intervention often prove attractive as places to settle down permanently or semi-permanently for American expatriates seeking a new life outside U.S borders.

Expatriation can also be motivated by family ties and friendships built over years of traveling or studying. In fact, many people who have studied abroad for a semester or more harbor the desire to stay and live there at some point in their lives. Others simply become attached to a certain place because of emotional ties formed with friends and family that have relocated there.

Other expats just want a complete change from what they are used to at home. Whether it's escaping busy city life for a tropical island, trading a cold winter climate for a hotter one, looking for more adventure in their lives instead of settling down, or simply needing a break from America's daily grind, Americans are increasingly deciding to leave the country where they were born in search of something new and different out in the world.

Some people, particularly those from America, have been conditioned their entire lives to believe that the only way they can be happy is if they have a certain job title in a specific industry in a location near family and friends.

Many expats choose not to return home after living abroad because they're afraid of being sucked back into this lifestyle. They've discovered that life outside of their native land has helped them grow as people and given them incredible experiences they would have otherwise never had. It's also taught them new perspectives on things like culture, politics, and what it means to live a fulfilling life.

For some Americans living abroad comes easy; and for others it takes careful planning, saving money and the resolution of any legalities before moving away from home.

But regardless of the reasons and regardless of where they end up in the world, expatriate Americans continue to make their mark by extending their reach beyond traditional borders or simply taking an open-minded approach to life.

The Pros and Cons of Living Abroad

The pros and cons of living abroad are going to depend on where you go as well but there are some common themes I hear from other expats.

Most expats choose to relocate to a country with a lower cost of living, Latin America being one of the top destinations. It not only makes your savings go farther but it’s a lot easier to make enough to cover expenses if you work as a freelancer. Here in Medellin, a city the size of Chicago, our monthly costs average about $1,800 per month for an upper-middle class lifestyle. We enjoy all the comforts of a large city at about a fourth the cost. Check out Numbeo for the cost of living in more than 5,000 cities in the United States and abroad.

I like that our son will grow up truly bilingual though I’m not impressed by the education system. If you plan on raising a family in your destination country, make sure you check out the quality and cost of education.

Along the lines of cost of living, our dollar goes a long way down here and will in many popular destinations around the world. Strong economic growth had made the Colombian peso appreciate over the last several years but the recent plunge in oil prices has led to a nearly 30% depreciation against the dollar. It’s happened across many other currencies and means people making dollars but spending in a foreign currency will be able to buy more.

For many, the ability to live better on less is the biggest advantage. I saw a recent survey that showed Americans aged 55 and older have an average of just $240,000 saved for retirement. Even with social security, boomers are looking at about $2,000 a month to live on. They’ll have to decide on ramen noodles in the U.S. or steaks abroad.

Get started on Fiverr today and finally get that project done!

I’ve had my share of complaints about living abroad and most everyone finds a few things that get under their skin.

My biggest complaint here in Colombia is the informal nature of the culture. The culture in the U.S. is much more literal and people generally follow the letter of the law. Here in Colombia, and throughout most of Latin America, rules and laws are a little more subject to interpretation. Many of the expats I talk to enjoy the laid-back perspective so it’s not necessarily a con for everyone. I just like a little more certainty.

Public services may not work as well as you would like them in your destination abroad. Public servants like police and teachers are paid next to nothing here, which means…you get what you pay for. It’s not like we’re living in a Mad Max sequel but people don’t generally count much on the legal system, police force or other public institutions.

Traveling can get really expensive, especially if you’re trying to get back to some of the popular U.S. destinations on the income you’ll be making overseas. The longer you live and work overseas, depending on how much you earn, it may make it difficult to move back to the States and live comfortably unless you have a good plan for savings.

Besides the biggies, you’ll have cravings and little things you miss when you move abroad. I would kill for a DiGiorno pizza or some good coffee creamer, neither of which are easy to come by cheaply here. Some expats like leaving it all behind and totally embracing the local lifestyle, so experiences vary.

How to Make Money Living Abroad

The biggest barrier to living abroad for most people I talk to is earning enough to support themselves and their family. Don’t assume that your American education or degree will easily land you a job. You’ll need a work visa for employment in most countries and employers may not have much of an incentive to sponsor your paperwork.

A drawback to a lower cost of living is that wages are much lower in many destinations abroad. Even professionals like doctors and lawyers only make about $2,000 a month here in Colombia and many survive on the minimum wage of $250 a month.

The go-to occupation for Americans living abroad is teaching English. You’ll need a formal certification and maybe even experience to teach in many places, so it’s best to line something up before you make the leap. You can make a decent living if you can get the hours but you’ve got to ask yourself if you would really enjoy teaching. If you are not going to enjoy your job, you might as well do it in the States where you’ll make much more.

Most of the expats I know, including myself, have found ways to live abroad while working for U.S. clients. This means freelancing or contract work for the most part. We just finished up a six-part series on making extra money that included a post on how to make money freelancing and making money writing online.

For the first time ever, I'm revealing the entire strategy I've used to self-publish 12 books on Amazon and average over $2,100 a month in passive income. In Self-Publishing for Passive Income, you'll learn everything you need from getting a book idea to making writing easy and selling more books.

You can make great money freelancingo but it may not be the easy life you’re expecting. Between two blogs and writing investment analysis for clients, I work between 50 and 60 hours a week. I make more than we need and could probably get by with 20 or 30 hours a week but freelancing means you’ll need to save for when clients get scarce.

It’s difficult to write a generalized article about living abroad and what you might experience because stories differ a lot from person to person and place to place. I’ve tried to cover some of the biggest challenges and benefits, as well as raise some issues you might not have thought about. I’ve put a note out to my expat friends on Facebook for their top tips and complaints about living abroad for a follow-up article I’ll post on Thursday.

Are you an American living abroad? What has your experience been, personal finance or otherwise? Send me a note or use the comment section below to share with the community.