Budgeting sucks ok. Everybody loves to talk about making a budget but then it lasts about as long as a snowflake in southern California.

Even the ‘money experts' that preach budgeting don't last more than a few months tracking their spending!

I used this exact system to find an extra $150 a month I used to pay off twelve grand in credit card debt when our son was born.

Today’s video is the second in our debt payoff series, an entire series on ditching your debt from creating those goals that are going to motivate you to some tricks I’ve learned to pay off debt.

Think of it like a TV series, at the end of this season, you will have all the tools you need to finally get out from under that crushing debt. Subscribe to the Let's Talk Money YouTube channel so you don't miss an episode of our debt payoff series.

Why is Keeping a Budget so Difficult?

Budgeting is like going to the dentist, right? It’s not that bad but we put it off and don’t go as often as we need to. Just like your mother that constantly nags you about getting a checkup, I preached for years about how people should be following a budget.

The fact is that even most financial advisors don’t follow a budget. We might check our spending every few months but how many people actually sit down every single month to track their spending?

That’s the problem with most budgeting advice, it assumes you’re going to do it every month. That’s the only way a budget is going to work and it just doesn’t happen.

So that old idea of budgeting isn’t going to be an effective tool in your debt payoff plan. You’re going to do it once and then miss months at a time and that’s going to derail your whole plan.

Instead, I’m going to show you how to un-budget your spending. How to know where your money is going down to the penny without having to write it all out.

You’re going to be able to use this to understand where your money is going, where you can save the easiest and how to build that into your debt payoff plan. Finally, I’ll show you the top reason even people that keep a budget fail to reach their goals and how to turn your budget upside-down to make saving automatic.

Before we get to that un-budget system, remember that this is just one video in our debt payoff series. We’re covering an entire system in finally ditching your debt to get out from under that burden from finding extra money without a second job to payoff strategies that are going to save you thousands.

I see a lot of people practicing the cash envelope system of budgeting, separating all your cash into envelopes depending on where it goes. Some people seem to have success with it. I don’t know, it seems like having a lot of cash sitting around the house and a lot of work.

I’ve found an easier system, probably the easiest I’ve ever seen for budgeting called the one-card system. This means using one card, a debit card or a credit card, for all your purchases. Everything is going to go on that card and it’s going to automatically track every penny you spend.

This is the easiest way you’ll ever find to track your spending and it comes with extra benefits like building your credit score and getting those cash back points.

Each month when your statement closes, you’ll get a printout of your spending. Then you can separate each item into four categories; fixed expenses, variable expenses, irregular spending, and wants. This is where you’re really going to be able to see your spending and find out where you can save the most without skimping.

Fixed expenses are bills you pay every month. The amount doesn’t change much and it’s something you absolutely need, so we’re talking rent, car payments, and insurance.

Variable expenses are things like groceries, clothing, and utilities. These might be things you still need but the monthly amount changes.

Irregular Expenses are those emergencies and annual subscriptions, things that you might not have to pay for months but can be budget busters when the do come up. This is going to be things like professional dues, tuition, and home maintenance.

The wants category is everything else, all those things that you didn’t necessarily need but bought it anyway. I’m not saying it was wasteful or trying to shame you. This un-budgeting system isn’t about shaming you into saving.

It’s about seeing where your money goes and being able to adjust to pay off your debt.

Using the one card system and organizing your spending this way is going to make it easy to track everything. That’s what makes it so powerful, that it takes almost no effort but can help you get your spending under control. I’ll show you a trick to make saving automatic in a minute but this is all going to make controlling your spending super simple when we get to the ideas on saving more money in the next video.

How to Save Money with Your New Budget

Now you might want to start this system using a debit card, that’s going to make it easy to track everything but without the risk of charging too much on your credit card. If you think you can use a credit card without spending so much that you can’t pay it off at the end of the month, then use that because you’ll get those cash back bonuses and other points.

Now let’s look at how to find a few places to save in this un-budgeting system and then I’ll show you that trick to make saving automatic.

The wants category is the easiest because these are all the spending you could have lived without. It’s important to have fun with your money and enjoy life but you have to make the tough decisions when you’re trying to pay off debt. Take a look at a few months’ of your spending in this category and start looking for those times that you can cut back a little.

You can also save money in a lot of these other categories as well though. We’ll talk about specific ideas next week in our finding extra money video but it can be as simple as shopping the deli instead of buying pre-packaged meats. That one trick alone saved our family $70 a month.

But I want to get to that automatic savings trick. You see, one of the biggest reasons even people that keep a budget fail at paying off their debt is exactly because of that budget. You’ve probably seen this before. You work out a budget, listing your income and expenses, and everything comes out even. Your expenses come to just about exactly your income maybe with fifty bucks or so to save. 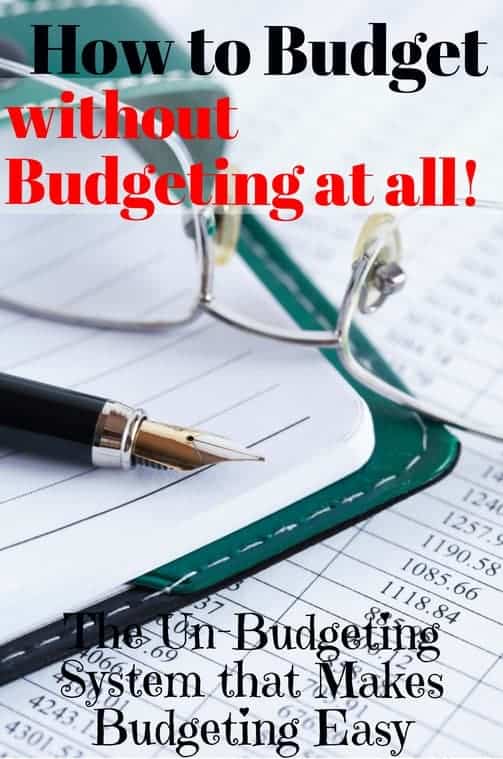 The problem here is that there is absolutely no motivation or need to cut spending. Why fix something that’s not broken, right?

But it is broken and you just don’t realize it. If you don’t have a couple hundred extra for faster debt payoff or to save for your goals then you aren’t heading in the right direction. You’ll never make any progress with this kind of budget and you’ll always be on that hamster wheel, that debt trap.

The solution is what I like to call turning your budget upside-down. Most people list their income then expenses in a budget and only what’s left over at the bottom goes to saving or paying off debt.

Instead, put your savings on top. Take an amount out for debt payoff or investing first and then what’s left over goes to expenses. Start by taking out maybe a hundred or so more than you usually save but this is going to force you to take a harder look at those expenses.

You’ll have to cut spending because that’s the only way the budget is going to come out.

You can use this trick with the one-card system as well, just have a certain amount come out of your checking account as soon as you get paid. Make an extra payment on your debts immediately or transfer it to investments before anything else comes out of your account.

Our next video in the debt payoff series is probably my favorite. We’ll be looking at all the tricks you can use to find extra money without having to work a second job. These are going to be some great ideas to save extra money without skimping every penny or making yourself miserable.