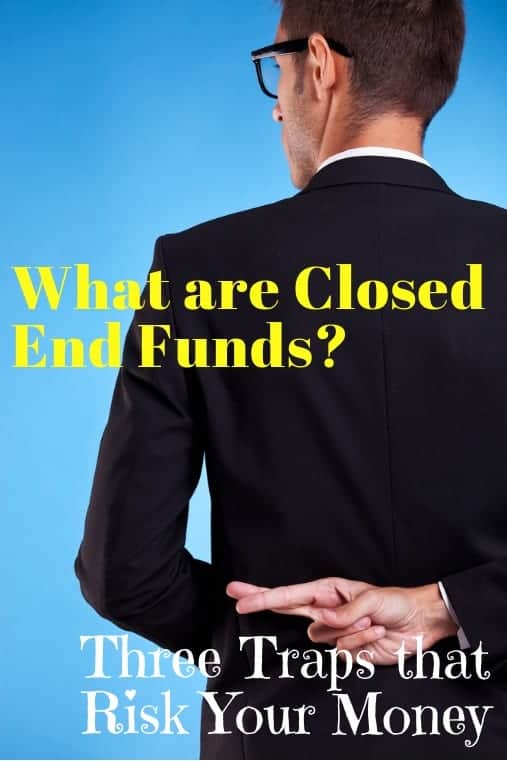 Closed-end funds can be a tempting investment but do you know the risks?

On the surface, there’s a lot to like about closed end funds. You can get a big discount to the value of the fund and a higher dividend than comparable funds.

What you don’t see in these funds can kill your portfolio though.

In this video, I’m revealing the three hidden dangers in closed end funds that destroy wealth. I’ll show you the difference between closed funds, mutual funds and ETFs as well as when to use each.

We’re building a huge community of people ready to beat debt, make more money and make their money work for them. Subscribe and join the community to create the financial future you deserve. It’s free and you’ll never miss a video.

What are Closed-End Funds?

I get a lot of questions about closed end funds so I thought I’d do a video describing the investments, explaining the pros and some risks that most investors don’t see until it’s too late.

Those of you in the community know I’m a big fan of fund investing, putting your money to work in those diversified funds to take some of the risk out of stock-picking. We’ve talked about the difference between mutual funds and ETFs on the channel but we haven’t yet looked at closed end funds.

A closed end fund is just like a mutual fund or an exchange traded fund in that a manager buys and sells investments and investors can buy an ownership stake in the whole portfolio. In exchange for this ease of investing, the manager and investment company charges an annual fee called an expense ratio that gets deducted each year directly from the portfolio.

How Do Closed-End Funds Work?

That’s how closed end funds, mutual funds and ETFs are similar. Closed end funds are different because they don’t issue or redeem shares like these other two funds.

When a mutual fund or ETF gets new investor money, the manager issues new shares in the fund and uses the money to buy more of the fund investments, the underlying stocks or bonds. This works the other way when investors sell an ETF or mutual fund, so the manager has to redeem shares and sell some of those assets.

With a closed end fund, you can buy and sell the fund in your online investing account just like an ETF, but the fund manager isn’t issuing or redeeming shares. The share count is fixed so it’s only investors that are buying and selling the shares between each other.

That creates one of the most confusing parts of a closed end fund, a discount or premium to the actual value of the investments held by the fund. The price of the fund shares, the price investors pay, can fluctuate depending on what the market wants to pay from one day to the next.

Let’s look at the Nuveen AMT-Free Quality Municipal, a closed end fund we’ll use as an example throughout the video. Here we see that the value of the investments held by the fund, its net asset value or NAV is $15.35 per share. That’s the value of the municipal bonds in the fund.

But the shares only trade for $13.81 on the market, that’s how much investors are willing to pay for the fund, 10% less than the fund assets.

That might seem like a great deal, right? You’re getting shares of a fund with assets that are worth over $15 but only paying $13.81 per share. Everyone likes getting a discount right?

But that NAV means nothing and this is the first trap a lot of investors fall into when talking about these closed end funds.

Looking at a chart of the price and NAV value, we see that for the last five years, the share price has followed the NAV value almost exactly. So even buying at that 10% discount, when you go to sell the shares, you have to sell them for a 10% discount.

If we look out further to the life of the fund, we see that the discount has been smaller in the past but has been pretty consistent lately. So maybe you can buy the shares at the 10% discount and hope it shrinks to sell at the NAV but there’s nothing to say it’s going to happen.

A lot of investors like to look at a big discount compared to where the fund was trading and think it’s a great deal. If the fund price was trading close to its NAV in the past then it should trade there sometime in the future too…right?

Think of it from the market perspective though. There’s a reason the market is only willing to offer so much for the shares even though the actual fund assets are higher. There’s a reason for that discount whether it’s external economic factors or internal to the fund company.

Understanding that reason is just another layer of analysis you need to do with closed end funds versus exchange traded funds.

Do Closed-End Funds Cost More than ETFs and Mutual Funds?

Another one of the big selling points for closed end funds is that the expense ratio, that annual fee charged to run the fund, is typically lower than fees charged on mutual funds. The problem here is that if you’re looking at fees, you’re much better off with an exchange traded fund.

Let’s look again at the Nuveen closed end fund and we see that the baseline expense, that’s the annual management expense ratio is about one and a quarter percent. Now this is already pretty high and about average with most mutual funds that charge around a 1% annual expense ratio.

Add to this an interest expense though, which comes from the leverage that we’ll talk about next, and this fund is charging investors almost 2.3% a year to hold the fund.

If you compare that 2.3% expense to the 0.8% charged on the Vanguard Tax-Exempt Bond Fund, ticker VTEB, you start to see how these closed end funds really start to bite into your wealth.

We’ve talked about this a lot on the channel. There is a race to the bottom in ETF fees with Vanguard, Schwab and iShares all lowering fund fees to less than a tenth of a percent in many cases. Unless you find a fund managed by the love child of Warren Buffett and Peter Lynch, there is no reason to pay a 1% or higher expense ratio.

Now of course the closed end fund people would say, we can get you a higher return than ETFs so you make up for that higher fee.

There are a couple of problems though, one that’s obvious looking at these returns and another that isn’t as obvious.

Most investors think they’re getting a bond fund with these closed end funds but these are not the safety you expect from bonds. Most closed funds use leverage, borrowing to invest more than assets, to boost their returns and distributions.

In fact, the Nuveen fund has a 38% leverage ratio which means its borrowed billions to juice those asset returns.

That’s great when the fund does well. You get that 15% annual return. It’s not so great when the bonds get hit and you get double-digit losses on a bond fund you though would protect your money.

The second problem though is that those annual returns really mean nothing unless you sell the investment. You’re not booking that return until you sell so it really becomes a market-timing investment rather than a long-term strategy.

If you’re looking at bond funds for income and protection against that volatility in stock prices, this is definitely something you’re not going to find in closed end funds.

These closed end funds aren’t always what the name implies either. Portfolio managers are under immense stress to produce higher returns and that sometimes means taking on more risk than investors realize.

In the Nuveen fund, and remember this is called the “Quality Municipal” fund so you would expect high quality and safe municipal bonds, but when we see the credit quality of the bonds held, it’s not quite the case. Almost 11% of the bonds in the fund are non-investment grade rating of BB or below and another one-in-five are on the edge there with that triple-B rating.

This isn’t to say that closed end funds are always a bad investment. You can make some very good returns buying and selling at the right time but again, that’s more of a bet on the fund discount rather than a long-term investment in the fund assets. If you look at those three big risks in closed end funds; the leverage, huge expense fees and uncertainty around the discount, longer-term investors are usually better off with an ETF.