The Shocking Truth About When to Take Social Security Benefits

You’re nearly there! That proverbial brass ring of retirement is just around the corner as you celebrate your 60s and you can’t wait to start enjoying the easy life.

All those years of paying into social security are about to pay off and not a moment too soon. The Social Security Administration (SSA) reports the trust fund will start paying out more than it collects in 2034. Good luck to anyone 50 and under.

Is it worth it?

You could still cut back on work and just withdraw a little more from your investments while you watch your SSI paycheck grow. How do you decide between taking social security now or waiting?

It’s a question 10,000 baby boomers ask themselves every day. That’s the number of Americans that become eligible for SSI benefits each day and need to decide whether to start collecting on their hard work or to delay benefits.

The accountants at the SSA know the answer…do you?

Employers and workers pay a certain percentage of your income into a social security trust fund. For those payments, you earn the right to a monthly benefit when you start collecting later in life.

Once you start collecting social security, you receive a fixed amount every month for as long as you live. That fixed amount currently averages $1,360 a month for people that wait until their full benefit age.

Anyone can start collecting their social security benefits at age 62 but you won’t get your full benefit until your Full Retirement Age (FRA). Those born after 1960 that claim benefits from 62 only receive 70% of what they would have received had they waited until their FRA at 67-years of age to start collecting. That means an average of $950 a month for life.

You’re giving up just over $400 a month for life in order to start collecting benefits five years earlier.

Is it worth it? 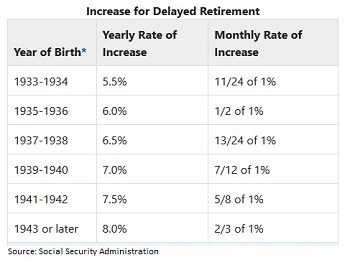 Now what if you could boost your monthly benefit to $1,686 by waiting another three years and retiring at 70-years of age?

You earn extra money for every year you wait to start collecting. Those born after 1960 earn an extra 8% in monthly benefits for every year they wait after 67, up to 70-years of age.

Would that be worth it?

The Myth Behind Delayed Retirement Benefits

Getting an extra couple of hundred dollars a month for life sounds great. An extra $200 a month from age 65 to 85 means a payout of nearly $50,000! That’s awfully tempting, especially for someone that can start withdrawing money from investments to cover living expenses.

The problem is, the math just doesn’t add up.

We’ll look at the numbers below but unless you win the longevity lottery, the return on waiting to take social security benefits is extremely low.

Why do you think the Social Security Administration is dangling that carrot in your face? Because they know it’s worth more to them if you wait.

Granted, some people might not have a choice. Retiring at 62 isn’t an option if that $950 SSI check is all you can count on. If that’s the case, even the $1,686 you’ll get by waiting to age 70 might not be enough to make ends meet.

Nearly two-in-three Americans (60%) are forced to retire sooner than expected according to a survey by Voya Financial. Whether it’s a layoff, medical emergency or caring for their spouse – the prospect of a few hundred extra in monthly SSI payments if they increase their investment withdrawals for a few years makes sense.

The Numbers Behind When to Take Social Security Benefits

So you’re faced with the choice between taking social security now or using investments to cover expenses and earning more in lifetime SSI benefits later. Withdrawing on your retirement savings faster than planned means you might run out but that’s when those higher SSI checks start to pick up the slack, right?

To answer the question, we need to turn those extra SSI benefits into a rate of return so we can compare it to the return you earn on your investments. 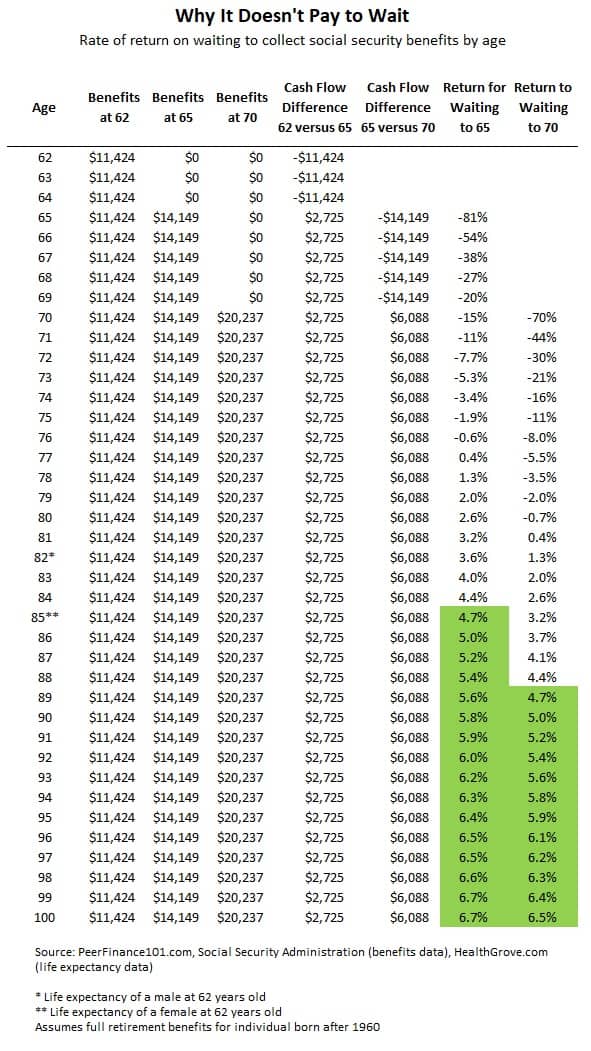 For example, someone waiting to collect benefits at 65 years of age would receive an additional $2,725 a year in benefits. If they lived to 80 years old, that would mean an additional $43,600 in exchange for giving up the $11,424 a year they would have collected those first three years after 62 years of age.

That’s way under the rate of return you’d get on even the most conservative retirement investment portfolio. Looked at it this way, it makes no sense to use investment savings to pay for expenses while you wait to start social security.

In fact, it doesn’t start to make financial sense to delay retirement until you get to the very edge of life expectancy.

The average female age 62 can expect to live another 23 years according to life insurance tables. If she waits until 65 to start collecting social security payments, the return on those lost three years of monthly checks is 4.7%.

Guys don’t have it so good. The life expectancy of a 62-year old male is only another 20 years. If the average Joe Schmo waits until 65 to retire and then ‘stops collecting’ benefits at age 82, the return on waiting those extra three years is only 3.6%.

Even a conservative investment portfolio of 25% stocks, 60% bonds and 15% in real estate investment trusts (REITs) can earn 5% annually. That means it doesn’t make sense to spend through your investments unless you’re making more than 5% by delaying social security.

Of course, this is all complicated by not knowing how long you’ll be able to collect benefits. The longer you live to collect those additional benefits, the more sense it makes to delay starting.

The bible says Methuselah lived to 969 years old…meaning he would have been lucky enough to collect an extra $5.5 million by waiting to retire at 70 instead of 65 years of age. 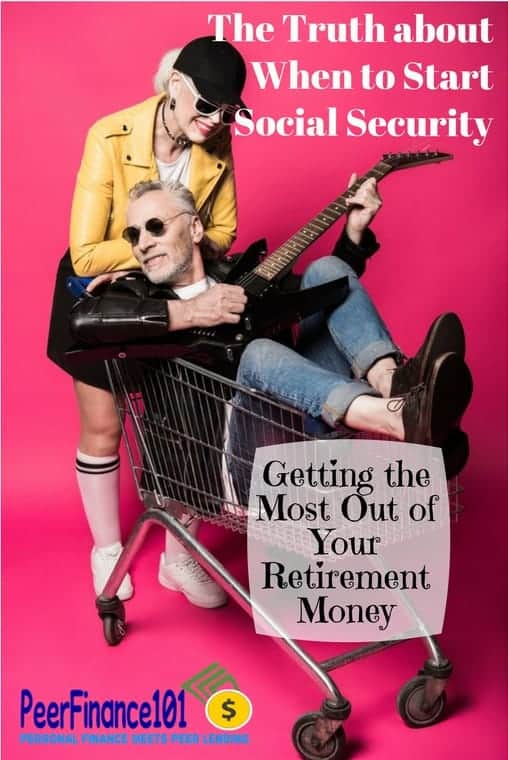 The rest of us probably won’t be so lucky.

The best you can do is look at life expectancy, 82 for men and 85 for women, and your own family history. If you’ve got a reasonable shot at seeing your name called out on the Today Show for your 100th birthday, it might make sense to delay collecting social security.

Note that the table doesn’t account for survivor benefits which increase the rate or return slightly for the surviving spouse. Don't forget, even if you delay collecting benefits, you'll still have to start taking money out of your retirement plans after 70 1/2 years of age.

Reasons It Might Pay to Delay Social Security Benefits

So now that I’ve depressed you by talking about how early everyone is going to die and that you better get your money while you can, let’s look at a couple of reasons why it may make sense to pay living expenses out of investments and wait to start social security.

First, as we talked about, is life expectancy. I highlighted the table in green for the age you need to reach for it to make sense to delay SSI payments.

For example, women of average health that reach 62 might think about waiting to 65 to start social security benefits. They can expect to live to 85 years old and the return on those delayed benefits is just under five percent, a solid return for a conservative retirement portfolio.

If your parents and grandparents all make it to a ripe old age, you exercise and eat right, then you might consider delaying social security payments…maybe even to 70.

The other scenario where it makes sense to delay collecting social security is if you enjoy working and don’t need the money. Taking social security while you’re still working will also reduce your benefits. If you haven’t reached your full retirement age, you’ll lose $1 in retirement income benefits for every $2 you earn above the annual limit ($15,720 for 2016).

There are still a lot of personal questions to answer when you should start taking social security beyond the cold numbers listed here. Talk it over with your spouse or a financial advisor to make sure you know what’s right for your situation. As for me, I’m collecting those SSI checks the day I reach 62!

How to Invest Your Money Just Before Retirement